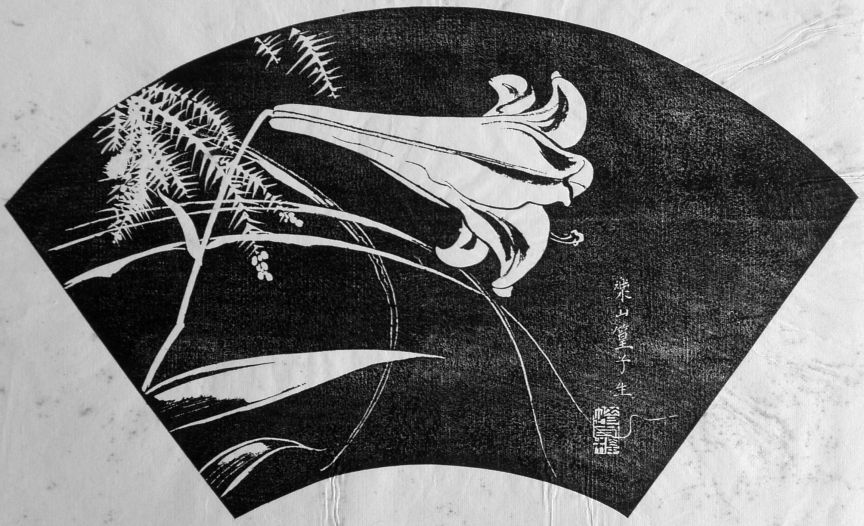 The signature 楽山篁子生, Raku-zan Kou-shi-sei, which is found on most later woodblock prints, first occurred on a fan design in this print 104-1. Although this is its first occurrance in this series, the signature was previously published on the 36 Series designs 102 and 103, and also is found on 104.

Rakusan did not include the Fan Series in his main sequence numbering. Therefore, the original number used for each of the 36 Series prints has been modified to identify the Fan Series members of its theme. The five different fan silhouette shapes have been here assigned arbitrary numbers 1 through 5. To indicate a fan design these shape designations are added to the 36 Series number separated by a hyphen. In themes which contain duplicated fan shapes, one has been arbitrarily designated A and the other B. 104-1 indicates that this is a Fan Series design with fan shape 1 in the 104 Lily theme. Like all other designs in this series, 104-1 was only produced in a single print run, and few copies are currently documented.

Copies in Public Collections:
Edition I: Museum of Fine Arts, Boston, MA, USA; (1950) 50.323 [not illustrated online]. Theme History:
Rakusan began creating the Fan Series with a mixed set of designs whose signatures and seals suggest they were carved during the last half of 1933. Aside from a scattering of designs eventually used for later themes, the majority of these early designs were assembled into the first six themes of the series, including the 104 Lily theme. The 36 Series designs for all six were also completed and carved within that same short period. The 104 Lily theme is one of the many entirely regular themes represented by a complete fan quintet and a color woodblock print. Rakusan included at least two different kinds of lily in the 104 Lily theme designs, and clearly the defining subject is just 'lily' rather than any particular species.

The composition of 104-1 includes a single lily stem with a fully opened flower and a couple of leaves. Entering from upper left are a few sprigs of red cedar and three leaves of an unidentified grass. The open flower most of the other elements are shown silhouetted, but the flower has internal lines - essentially a line drawing with the solid background darkened out. Some of the leaves are shown as simple lines on that background. This design is not a true negative since the flower in life is a very pale color. This design is one of several early designs where Rakusan struggled with his ishizuri techniques.

Japanese Red Cedar (or Peacock Pine), Cryptomeria japonica, 杉 sugi, is a native Japanese tree which is widely used for timber and for landscape plantings.

The common name for grass is 草, くさ, kusa. It is probably not possible to identify the species of grass with any great confidence. (Note that the same grass is used in a similar way in the composition of 104.)