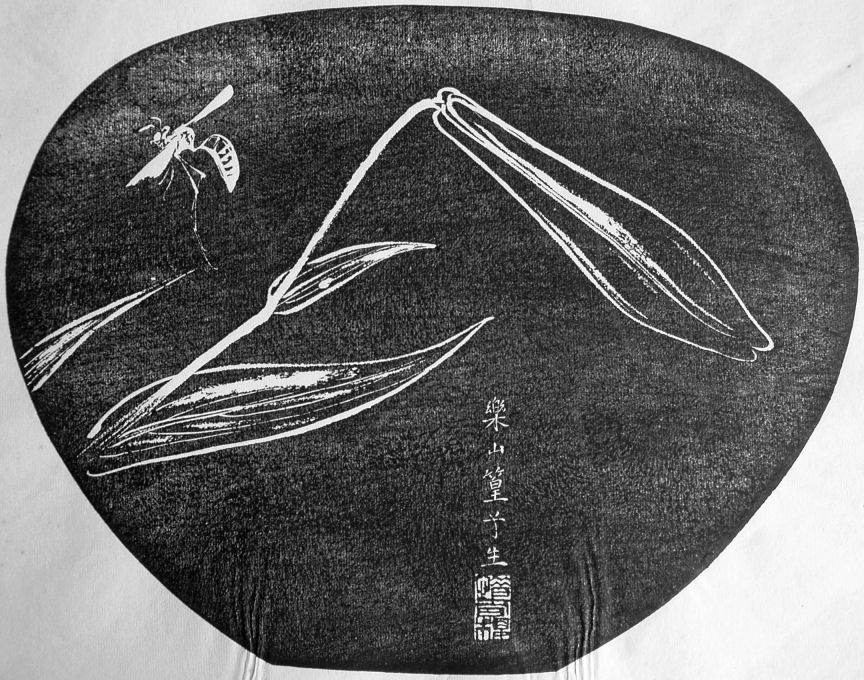 Rakusan did not include the Fan Series in his main sequence numbering. Therefore, the original number used for each of the 36 Series prints has been modified to identify the Fan Series members of its theme. The five different fan silhouette shapes have been here assigned arbitrary numbers 1 through 5. To indicate a fan design these shape designations are added to the 36 Series number separated by a hyphen. In themes which contain duplicated fan shapes, one has been arbitrarily designated A and the other B. 104-3 indicates that this is a Fan Series design with fan shape 3 in the 104 Lily theme. Like all other designs in this series, 104-3 was only produced in a single print run, and few copies are currently documented.

The composition of 104-3 includes a single bamboo lily stem with a closed bud and a few leaves. A flying wasp is shown in large size to make it seem close to the viewer and the lily farther away. All of the included elements are rendered as simple line drawings.


Species Illustrated:
Bamboo Lily, Lilium japonicum, 笹百合, ささゆり, ササユリ, sasa-yuri, lit. 'bamboo-grass lily', is the native species illustrated in 104-3 (and also in 104-1, 104-5, 104, and 69). Although the flower in 104-3 is not shown open, the shapes of the bud and the leaves are diagnostic for this species.
(The other two lily designs, 104-2 and 104-4, are native Tiger Lily, Lilium lancifolium, 鬼百合, おにゆり, オニユリ, oni-yuri, lit. 'demon-lily'.)
[In 69 Rakusan apparently accidentally uses the name of a different native species in the title-caption, Goldband Lily, Lilium auratum, 山百合, やまゆり, ヤマユリ, yama-yuri, lit. 'mountain lily'. There are currently no identifiable examples of Goldband Lily among Rakusan's artworks.]

Wasp [Identification of this wasp is in process.]