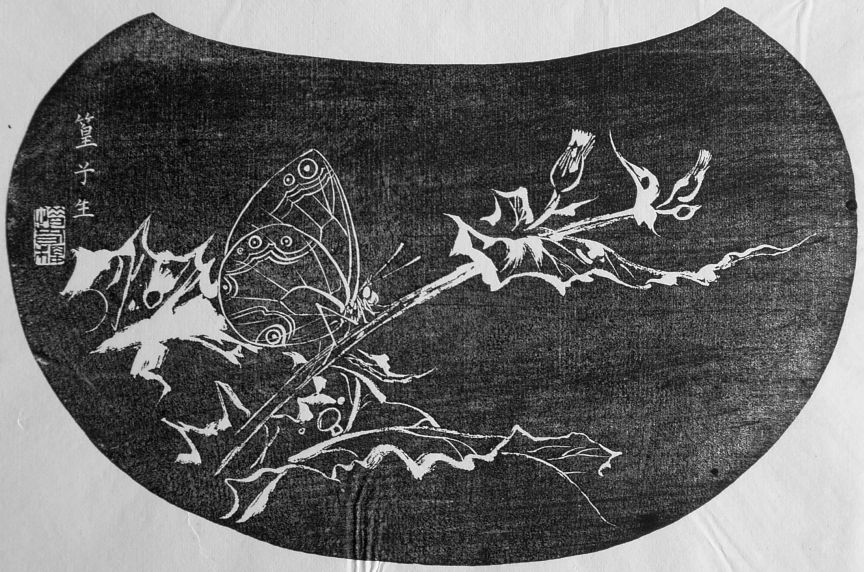 Rakusan did not include the Fan Series in his main sequence numbering. Therefore, the original number used for each of the 36 Series prints has been modified to identify the Fan Series members of its theme. The five different fan silhouette shapes have been here assigned arbitrary numbers 1 through 5. To indicate a fan design these shape designations are added to the 36 Series number separated by a hyphen. In themes which contain duplicated fan shapes, one has been arbitrarily designated A and the other B. 105-2 indicates that this is a Fan Series design with fan shape 2 in the 105 Butterfly theme. Like all other designs in this series, 105-2 was only produced in a single print run, and few copies are currently documented.

Description:
The composition of 105-2 includes a small brown-butterfly sitting on a leafy stem of spiny sowthistle with three buds. The sowthistle is drawn with loose, painterly lines which look equally well in the ishizuri version or in the original. However, in the ishizuri version the very detailed line drawing of the butterfly shows the color pattern of its wings as it is in life. In this and a few other early drawings Rakusan used outlining to set apart elements whose ishizuri versions were at least in part the natural ones. It is probable that the original sketch showed the butterfly in proper coloration, and the adjustments were made during carving. As a result 105-2 is one of several early designs where Rakusan struggled with his ishizuri techniques.


Species Illustrated:
Rakusan was typically very detailed in his depictions of insects, and it is almost always possible to identify them to some degree. The small butterfly with eye-spotted wings shown in 105-2 can only be a satyrid (or satyrine) or brown-butterfly (family Nymphalidae, subfamily Satyrinae), 蛇の目蝶 , じゃのめちょう, ジャノメチョウ, janome-chou. [蛇の目, じゃのめ, ジャノメ, janome, means 'bull's-eye or double ring (pattern)' (lit. 'snake's-eye').] However, its wings have a pattern which does not closely match the most commonly encountered species. It is unclear whether or not Rakusan has taken artistic liberties with the spot pattern, or it is intended as an actual species which has yet to be identified. The brown-butterflies in 105-2, 113-5, and 115-4 are particularly similar.

Spiny Sowthistle, Sonchus oleraceus, 野芥子, のげし, ノゲシ, no-geshi, is a common native weed. It is used in 105-2 and in 105 (with a different kind of butterfly) in this theme; as well as in a river crab design, 131-2. In all of these examples the plant is a non-thematic subsidiary element.