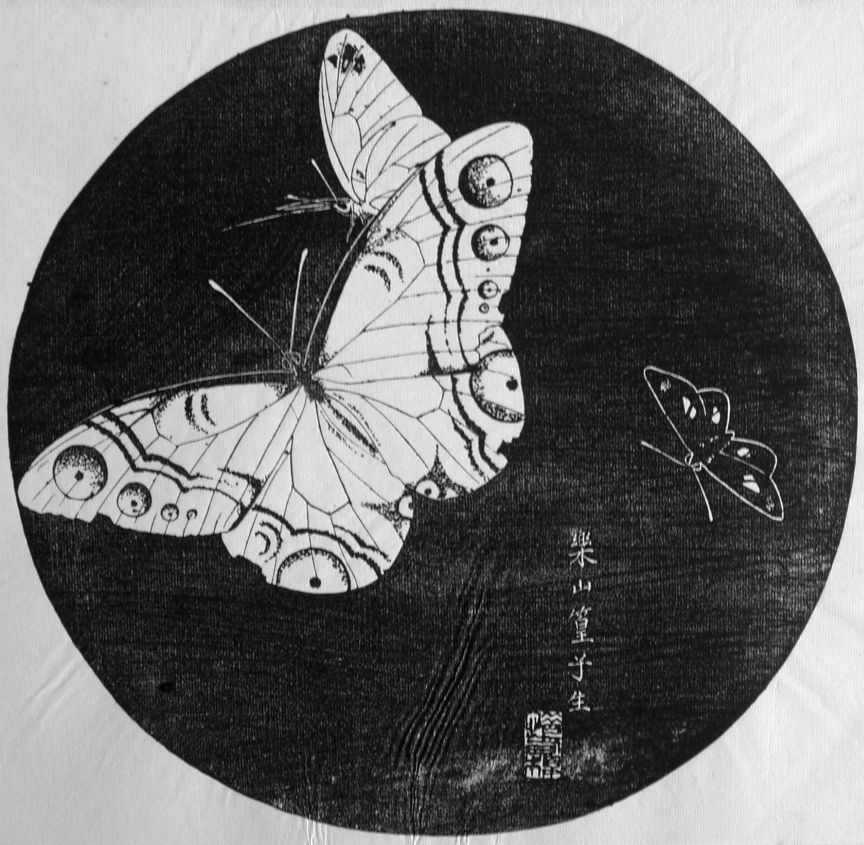 Rakusan did not include the Fan Series in his main sequence numbering. Therefore, the original number used for each of the 36 Series prints has been modified to identify the Fan Series members of its theme. The five different fan silhouette shapes have been here assigned arbitrary numbers 1 through 5. To indicate a fan design these shape designations are added to the 36 Series number separated by a hyphen. In themes which contain duplicated fan shapes, one has been arbitrarily designated A and the other B. 105-5 indicates that this is a Fan Series design with fan shape 5 in the 105 Butterfly theme. Like all other designs in this series, 105-5 was only produced in a single print run, and few copies are currently documented.

Description:
The composition of 105-5 only includes three flying butterflies.The two smaller butterflies are drawn with their actual black and white color patterns as in the ishizuri version, but there the large butterfly is a line drawing probably with the areas of light and dark reversed. This mismatch includes 105-5 as one of a group of several early designs where Rakusan struggled with his ishizuri techniques.

Most of the models for the Fan Series woodblock prints can be reconstructed by digitally reversing the image of the woodblock print. However, for 105-5 only the largest butterfly and the signature and seal reflect the now-lost, actual-size, original sumi sketch (since the other two butterflies would have resembled those in the woodblock print):


Species Illustrated:
Rakusan was unusually meticulous in his representations of insects, and it is almost always possible to identify the kinds of insects very closely. However, several of his butterflies (including one of those in 105-5) are apparently distinctively different from the normal Japanese species which they most resemble. It is known that Rakusan was locally famous for depicting insects, and at least one of his major patrons was an entomologist. Rakusan easily could have had reference to exotic speciments which could be difficult to identify. It also remains possible (but perhaps less likely) that for decorative effect Rakusan tweaked his depictions of only a few of the normal native species. In any case, each of the butterfly species in 105-5 is from a different family of butterflies.

The general name for all skipper butterflies (family Hesperiidae) is 挵(蝶),せせり(ちょう), セセリ(チョウ), seseri (-chou), 'skipper (butterfly)'. The small skipper butterfly on the right is Grass Demon, Udaspes folus, 大白紋挵, オオシロモンセセリ, oo shiro-mon seseri, lit. 'large white-patterned skipper-butterfly'. It has distinctive light colored patterns on each of the four dark wings. This species is native to South Asia but has naturalized in Japan.

The small white butterfly at the top is the nearly cosmopolitan Small (Cabbage) White Butterfly, Pieris rapae, 紋白蝶, もんしろちょう, モンシロチョウ, mon shiro-chou, lit. 'patterned white-butterfly'. The general name for all of these closely related Yellow-and-White butterflies (family Pieridae) is 白蝶, しろちょう, シロチョウ, shiro-chou), 'white-butterfly', although many are actually yellow. However, this species is indeed white with a distinctive dark smudge pattern on the outside corner of the upper wings.

The large butterfly at left center is one of the problems for identification. It is evidently intended to be a kind of nyphalid butterfly (family Nymphalidae) 立羽蝶, たてはちょう, タテハチョウ, tateha-chou. The form most closely resembles Japanese species in the nymphalid genus Junonia, which are called タテハモドキ, tateha-modoki, loosely 'pseudo-nymphalids'. These larger species all have distinctive patterns of eye-spots on all four wings, but the wing patterns of the native Japanese species are different from the example in 105-5.