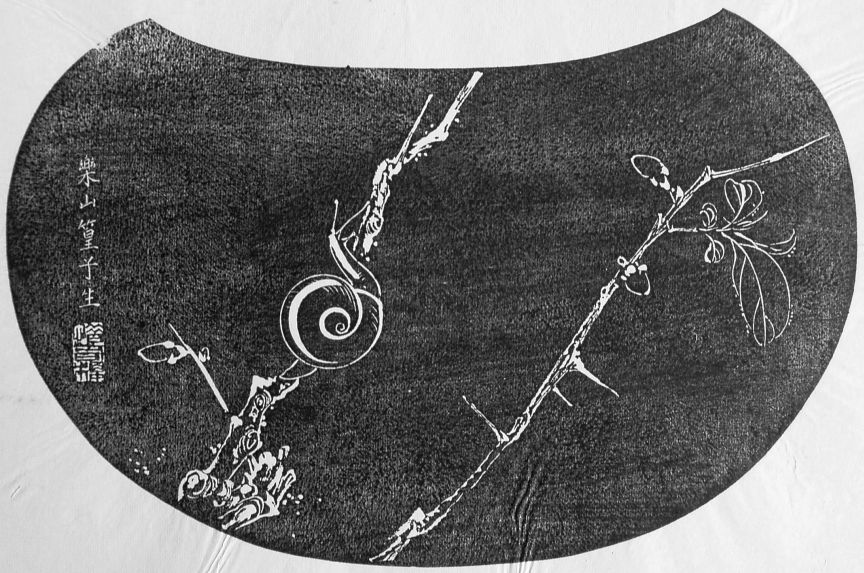 Rakusan did not include the Fan Series in his main sequence numbering. Therefore, the original number used for each of the 36 Series prints has been modified to identify the Fan Series members of its theme. The five different fan silhouette shapes have been here assigned arbitrary numbers 1 through 5. To indicate a fan design these shape designations are added to the 36 Series number separated by a hyphen. In themes which contain duplicated fan shapes, one has been arbitrarily designated A and the other B. 106-2 indicates that this is a Fan Series design with fan shape 2 in the 106 Quince theme. Like all other designs in this series, 106-2 was only produced in a single print run, and few copies are currently documented.

Theme History:
Rakusan began creating the Fan Series with a mixed set of designs whose signatures and seals suggest they were carved during the last half of 1933. Aside from a scattering of designs eventually used for later themes, the majority of these early designs were assembled into the first six themes of the series, including the 106 Quince theme. The 36 Series designs for all six were also completed and carved within that same short period. The 106 Quince theme is one of the many entirely regular themes represented by a complete fan quintet and a color woodblock print. The Fan Series woodblock prints of the 106 Quince theme were distributed in early 1934 in installment two (of twelve). The delivery documents for installment two remain to be discovered, but its delivery month was either February, March, or April 1934; and the woodblock prints would have been printed during the same month as the publication. Description:
The composition of 106-2 shows tw0 branches of what appears to be a small quince bush trained as a bonsai. The technique is a combination of simple line drawings for the buds and thorny stems; with additional shading on the branches and main trunk. The ground surface is suggested by groups of dots. Other similar dots halo some of the branches and leaves. Climbing up on the left branch is a bush snail rendered as a line drawing.

The land snail shown in 106-2 has a distinctive dark central stripe which suggests one of species of the endemic Japanese arboreal land snail genus Euhadra, often called in English 'bush snails'. It may be Euhadra amaliae, 口紅蝸牛, クチベニマイマイ, kuchibenimaimai, lit. 'lipstick snail'. The general name for any kind of snail (i.e. a member of the molluscan class Gastropoda) is 蝸牛, かたつむり, カタツムリ, katatsumuri. However when used without a qualifier, the name is more often applied to land snails than to marine or freshwater species, and the general name is often applied informally to this species and to other bush snails.