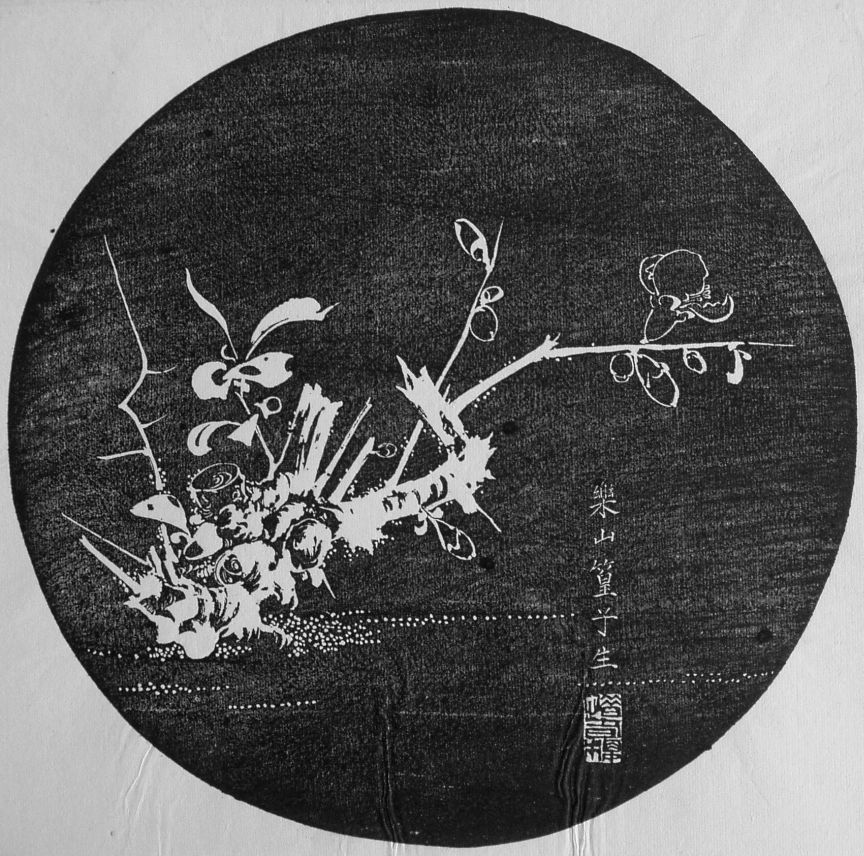 Rakusan did not include the Fan Series in his main sequence numbering. Therefore, the original number used for each of the 36 Series prints has been modified to identify the Fan Series members of its theme. The five different fan silhouette shapes have been here assigned arbitrary numbers 1 through 5. To indicate a fan design these shape designations are added to the 36 Series number separated by a hyphen. In themes which contain duplicated fan shapes, one has been arbitrarily designated A and the other B. 106-5 indicates that this is a Fan Series design with fan shape 5 in the 106 Quince theme. Like all other designs in this series, 106-5 was only produced in a single print run, and few copies are currently documented.

Description:
The composition of 106-5 shows an entire, small quince bush trained as a bonsai. The technique is a combination of simple line drawings for the flower, buds, and thorny stems; with additional shading on the leaves and main trunk. The ground surface is suggested by lines and groups of dots. Other similar dots halo some of the trunk and stems.


Species Illustrated:
The three species of flowering quince are collectively known in Japanese as 木瓜, ぼけ, ボケ, boke, and in English informally as "Japanese Quince". Today the Japanese name is also used particularly for one of the most common garden varieties, Chaenomeles speciosa var. cf. lagenaria, a selection of an originally Chinese and Korean species early imported into Japan. There is also a shorter-growing native species, Chaenomeles japonica. These quinces have been bred into many forms for flower and fruit production and are often used in bonsai.
Related Designs: Other designs in the 106 Quince theme:
Other designs with quince: