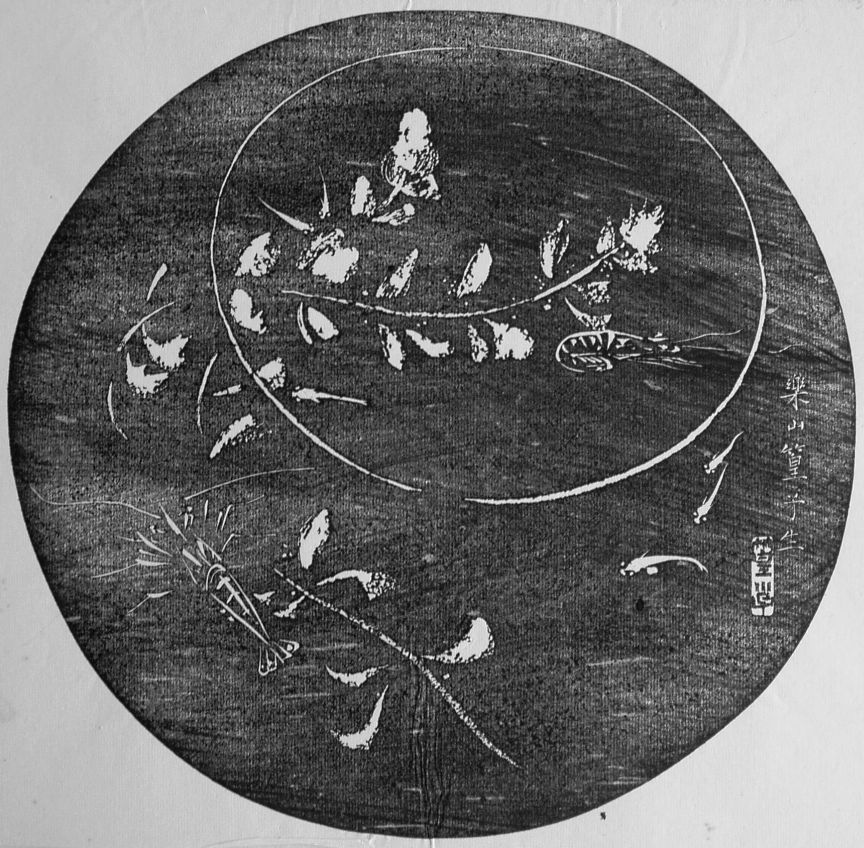 Medaka and Freshwater Shrimp with Water-milfoil

Rakusan did not include the Fan Series in his main sequence numbering. Therefore, the original number used for each of the 36 Series prints has been modified to identify the Fan Series members of its theme. The five different fan silhouette shapes have been here assigned arbitrary numbers 1 through 5. To indicate a fan design these shape designations are added to the 36 Series number separated by a hyphen. 108-5 is the Fan Series design with fan shape 5 in the 108 Goldfish and Medaka theme. Like all other designs in this series, 108-5 was only produced in a single print run, and few copies are currently documented.

The individual designs in the 108 Goldfish and Medaka theme were completed in at least two stages. Three of the five fan designs (including 108-5) have seal C which indicates a carving date during the first half of 1934. However, the other two fan designs and the 36 Series design 108 all have seal B which indicates a later carving period closer to the time of publication.

Description:
The design of 108-5 simulates an entire globular glass fishbowl seen from above. The round fan shape defines the bowl and an oval line at the top shows the water surface within. The composition includes six medaka, two small freshwater shrimp, and two sprigs of water-milfoil. The shrimp are quite sketchily rendered as line drawings, and the medaka and waterplant are essentially silhouettes. Rakusan always shows medaka as viewed from above in a conventional simplified style. These techniques work equally well either as ishizuri or in the original sketch.


Species Illustrated:
Medaka (Japanese Killifish or Ricefish), Oryzias latipes, 目高, めだか, メダカ, medaka, although not a Japanese native, derives one of its English names from Japanese. This rather small (2-4 cm long) native of Southeast Asia is amphidromous, meaning it moves between salt and freshwater at some point in its life. It is commonly found in flooded rice fields in coastal Asia. The medaka has been a popular pet in Japan since the 17th century, and it is hardy and easy to raise. It varies from brown or yellow-gold in the wild to white, creamy-yellow, or orange in aquarium-bred individuals.

Identification of the tiny shrimp in the bowl is difficult because of the sketchy way they are drawn, but their very small size suggests a member of the freshwater shrimp genus Caridina (family Atyidae) which share the general name 沼蝦, ぬまえび, ヌマエビ, nema-ebi, lit. 'marsh/pond shrimp'. A likely candidate is Yamato Shrimp (Amano Shrimp, Algae-eating Shrimp), Caridina multidentata, 大和沼蝦, やまとぬまえび, ヤマトヌマエビ, yamato nema-ebi, which is both native to Japan and today a common aquarium pet.

Water-milfoil is an attractive, but unfortunately invasive, type of water plant commonly used in aquariums. It occurs in the background of several Rakusan aquatic designs. The general name for water-milfoil is 総藻, ふさも, フサモ, fusamo, lit 'tufted waterweed', which is also the species name for Whorl-leaf Water-milfoil, Myriophyllum verticillatum. The several closely similar water-milfoil species and hybrids are difficult for the non-specialist to distinguish.