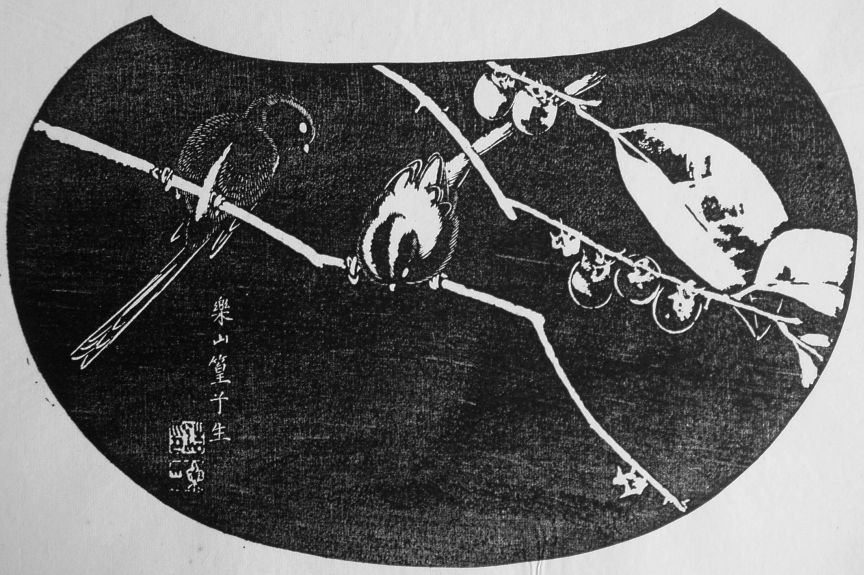 Rakusan did not include the Fan Series in his main sequence numbering. Therefore, the original number used for each of the 36 Series prints has been modified to identify the Fan Series members of its theme. The five different fan silhouette shapes have been here assigned arbitrary numbers 1 through 5. To indicate a fan design these shape designations are added to the 36 Series number separated by a hyphen. 110-2 is the Fan Series design with fan shape 2 in the 110 Persimmon theme. Like all other designs in this series, 110-5 was only produced in a single print run, and few copies are currently documented.

The signature and seal markings and inconsistencies in style suggest that the 110 Persimmon designs were actually created over an extended period encompassing late 1933 into the middle of 1934. This theme is unusual in that it includes designs with four different seals which were produced in at least three distinct carving periods. 110-2 is one of two fan designs in this theme with later seal B (which also appears in the 36 Series design 110). Fan designs with seal B were typically used to infill quintets whose other designs had been carved in previous seal use periods. The relatively early distribution of the 110 Persimmon theme fan designs means that 110-2 (and the other seal B designs in this theme) would have been completed only shortly before publication.

At least some persimmon designs were adapted from sketches originally created in the late 1920s during the planning of design 19 of the earlier 100 Series.

Description:
The composition of 110-2 includes three persimmon branches with fruit and a few leaves. The fruit are quite small and two calyxes remaining on the branches show where fruit is missing. A pair of long-tailed tits are sitting on one of the branches. (Fan designs with long-tailed tit designs probably derive from sketches for 100 Series design 79.) This woodblock print is one of the most accomplished later designs in this series which shows all of the image elements in perfect negative.