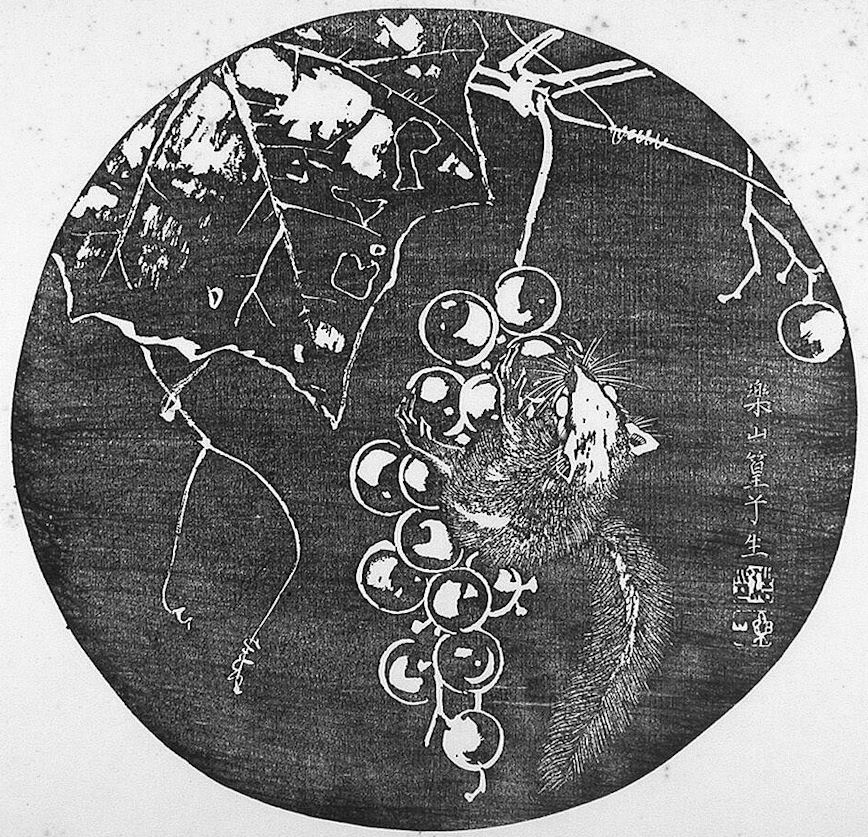 Rakusan did not include the Fan Series in his main sequence numbering. Therefore, the original number used for each of the 36 Series prints has been modified to identify the Fan Series members of its theme. The five different fan silhouette shapes have been here assigned arbitrary numbers 1 through 5. To indicate a fan design these shape designations are added to the 36 Series number separated by a hyphen. 111-5 is the Fan Series design with fan shape 5 in the 111 Grape theme. Like all other designs in this series, 111-5 was only produced in a single print run, and few copies are currently documented.

The individual designs in the 111 Grape theme were completed in at least two stages. Two of the five fan designs have seal C which indicates a carving date during the first half of 1934. However, the other three fan designs (including 111-5) and the 36 Series design 111 all have seal B which indicates a later carving period closer to the time of publication. (The 111 Grape theme is unusual in its seal markings in having a majority of the designs with seal B.)

Description:
The composition of 111-5 shows a portion of a grape vine, including a leaf, tendrils, and two bunches of fruit. A small squirrel is hanging from the large central bunch and is eating one of the grapes. Either the little squirrel is a very young juvenile, or, as seems more likely, it is just Rakusan's reworking of an older design with the squirrel in those proportions. The motif of a squirrel and grapes is a very old traditional pairing in regional Asian art. All of the elements are painstakingly carved so that the ishizuri version is an exact negative of the original sketch. 111-5 is remarkable also as the only design in which a mammal appears in any of the major Rakusan woodblock print series.

(Japanese) Squirrel, Sciurus lis, (日本)栗鼠, (にほん)りす, (ニホン)リス, (nihon) risu, lit. '(Japanese) chestnut-mouse', is a common motif in regional art. However, this design is the only known example of its use by Rakusan.