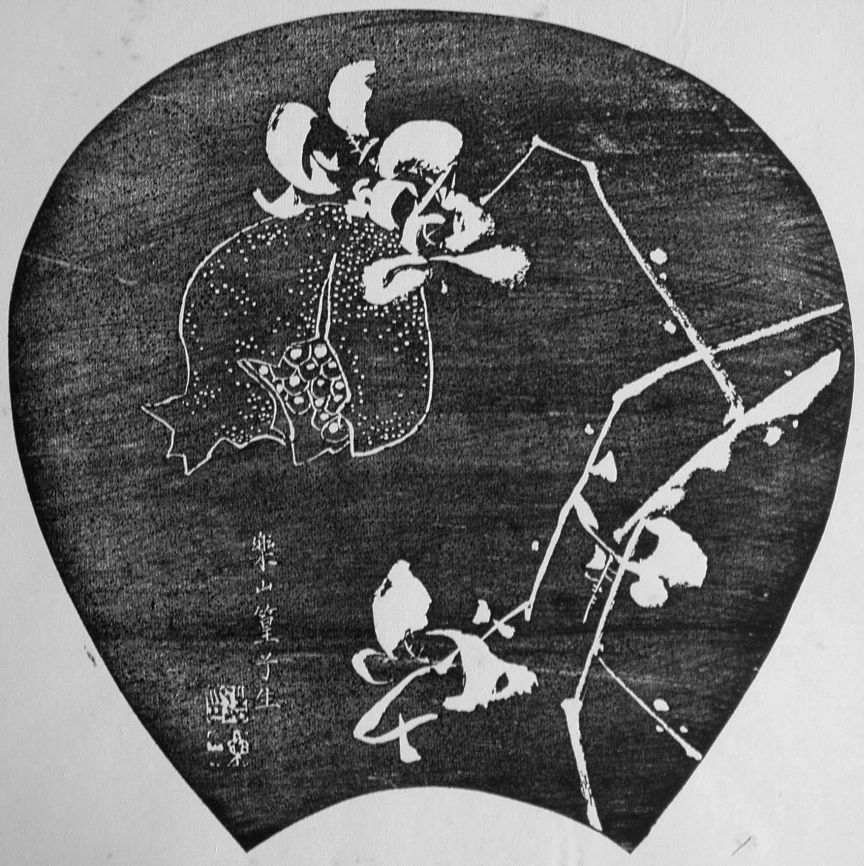 Rakusan did not include the Fan Series in his main sequence numbering. Therefore, the original number used for each of the 36 Series prints has been modified to identify the Fan Series members of its theme. The five different fan silhouette shapes have been here assigned arbitrary numbers 1 through 5. To indicate a fan design these shape designations are added to the 36 Series number separated by a hyphen. 112-4 is the Fan Series design with fan shape 4 in the 112 Pomegranate theme. Like all other designs in this series, 112-4 was only produced in a single print run, and few copies are currently documented.

Theme History:
The 112 Pomegranate theme is one of the many entirely regular themes represented by a complete fan quintet and a color woodblock print. The Fan Series designs in the 110 Persimmon theme were produced as woodblock prints in June 1934 and distributed June 25, 1934 in installment four (of twelve). On the documents attached to the delivery folio envelope Rakusan used the theme subject title, 柘榴, zakuro, 'pomegranate', which would also have been the title of 36 Series design 112 issued at the same time.

The individual designs in the 112 Pomegranate theme were completed in at least two stages. Two of the five fan designs and the 36 Series design 112 have seal C which indicates a carving date during the first half of 1934. Another fan design (112-3) has seal R which is a rare minor seal whose carving period has yet to be established. The other two fan designs (including 112-4) have seal B which indicates a later carving period closer to the time of publication.

In this project Rakusan openly experimented with mining an external source for some of his designs, Ten Bamboo Studio Manual of Painting, 十竹斎書画譜, Jitchikusai Shogafu. Here abbreviated TBS, this very famous, historic, and influential design book was first printed in China in the 17th century. TBS has been reproduced and reprinted in both China and Japan many times since, and Rakusan would likely have used one of the later Japanese monochrome translations. (An article exploring all of Rakusan's adaptations from TBS is in preparation.)

Rakusan completed each of the three themes in installment four with a single design taken from TBS. 112-4, the TBS design in the 112 Pomegranate theme, is one of the later seal B designs; and it clearly is in a style different from all of the others in the theme.

Description:
The inspiration for the composition of 112-4, which includes a a forking pomegranate branch with a few leaves and a mature fruit, is taken directly from a version of the TBS design shown below. Rakusan matched the style of the original in drawing the mature fruit, but rendered the rest of the design in a loose sketchy style. The mismatch in styles makes 112-4 look different from all of the others in its theme since each of those were executed entirely in his own style. However, both styles are essentially linear and display equally well in the ishizuri version or the original. This source example comes from a polychrome version in the collection of the Harvard Art Museums, but Rakusan likely used a monochrome edition as his pattern: The woodblock print of 112-4 was modeled closely on an actual-size original sumi sketch which although lost can be reconstructed by digitally reversing the image of the woodblock print:
Species Illustrated:
Pomegranate, Punica granatum, 柘榴, 石榴, 若榴, ざくろ, ザクロ, zakuro, is an originally exotic deciduous shrub. In Japan it has been extensively hybridized and is widely grown for its large edible fruit, ornamental flowers, and decorative bark which make it popular also as a bonsai subject. Rakusan most often illustrates the mature fruit which has split open as the rind dried, as it has in 112. However, in his various other prints he shows all stages of development from the blossoms on.
Related Designs: Other designs in the 112 Pomegranate theme:
Other designs with pomegranate: