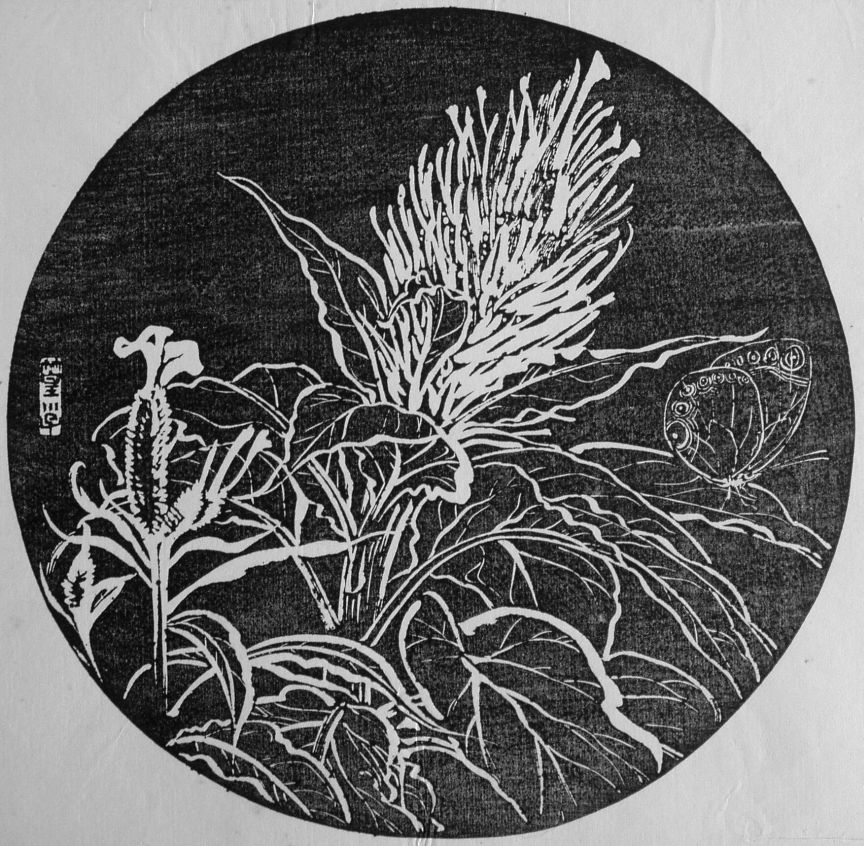 Rakusan did not include the Fan Series in his main sequence numbering. Therefore, the original number used for each of the 36 Series prints has been modified to identify the Fan Series members of its theme. The five different fan silhouette shapes have been here assigned arbitrary numbers 1 through 5. To indicate a fan design these shape designations are added to the 36 Series number separated by a hyphen. 113-5 is the Fan Series design with fan shape 5 in the 113 Cockscomb theme. Like all other designs in this series, 113-5 was only produced in a single print run, and few copies are currently documented.

The individual designs in the 113 Cockscomb theme were completed in at least two stages. Four of the five fan designs (including 113-5) have seal C which indicates a carving date during the first half of 1934. The remaining fan design and the 36 Series design 113 have seal B which indicates a later carving period closer to the time of publication.

Description:
The composition of 113-5 includes two small, flowering heads of crested cockscomb on the left, and in the center a single large head of plumed cockscomb. Sitting on a leaf at right is a small brown-butterfly. The cockscomb plants are rendered as rather fluid, but still detailed, bold line drawings. However, the butterfly is very finely detailed. Both techniques work equally well viewed as ishizuri or as the reversed original.


Species Illustrated:
Although not native to Japan, cockscombs and the related amaranths are old garden imports which for centuries have been extensively bred and hybridized by Japanese horticulturalists. These plants were favorite subjects for Rakusan and several diffferent kinds appear in his prints and paintings. The general name for the group is also the species name of the crested variety of cockscomb (sometimes simply called cockscomb), Crested Cockscomb, Celosia (argentea var.) cristata, 鶏頭, けいとう, ケイトウ, kei-tou, lit. 'chicken-head'.

Rakusan was typically very detailed in his depictions of insects, and it is almost always possible to identify them to some degree. The small butterfly with eye-spotted wings shown in 113-5 can only be a satyrid (or satyrine) or brown-butterfly (family Nymphalidae, subfamily Satyrinae), 蛇の目蝶 , じゃのめちょう, ジャノメチョウ, janome-chou. [蛇の目, じゃのめ, ジャノメ, janome, means 'bull's-eye or double ring (pattern)' (lit. 'snake's-eye').] However, its wings have a pattern which does not closely match the most commonly encountered species. It is unclear whether or not Rakusan has taken artistic liberties with the spot pattern, or it is intended as an actual species which has yet to be identified. The brown-butterflies in 105-2, 113-5, and 115-4 are particularly similar.

Related Designs: Other designs in the 113 Cockscomb theme:
Other related cockscomb and amaranth designs:
Other designs with eye-spotted butterflies: