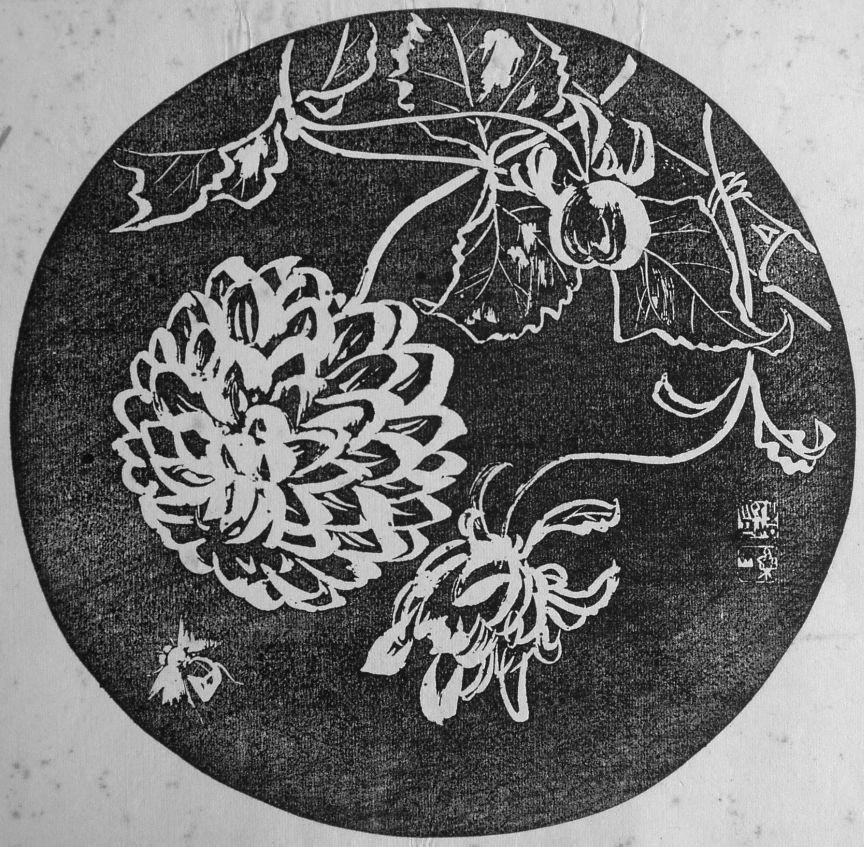 Rakusan did not include the Fan Series in his main sequence numbering. Therefore, the original number used for each of the 36 Series prints has been modified to identify the Fan Series members of its theme. The five different fan silhouette shapes have been here assigned arbitrary numbers 1 through 5. To indicate a fan design these shape designations are added to the 36 Series number separated by a hyphen. 115-5 is the Fan Series design with fan shape 5 in the 115 Dahlia theme. Like all other designs in this series, 115-5 was only produced in a single print run, and few copies are currently documented.

The 115 Dahlia theme is one of the many entirely regular themes represented by a complete fan quintet and a color woodblock print. The Fan Series prints of the 115 Dahlia theme were distributed in the summer of 1934 in installment five (of twelve). In the preview announcement on the installment four folio in June 1934, Rakusan used ダリヤ, dariya, 'dahlia' as the title for this theme. The delivery documents for installment five remain to be discovered, but its delivery month was either July or August 1934. The woodblock prints would have been printed earlier in the same month as their distribution. The Fan Series dahlia prints were carved in two stages. Three prints have seal C from the first half of 1934, and the other two (including 115-5) and the 36 Series design 115 have seal B which is later and closer to the time of publication.

Description:
The composition of 115-5 includes three pompon dahlia stems, with a fully open flower, a half-opened bud, and a tightly closed bud. The plant is supported by a bamboo stake or trellis. Flying below the largest flower is a kind of bee. The ends of the bee's wings are blurred to suggest motion. All of the design elements are rendered as sweeping, painterly, line drawings which look equally well viewed as ishizuri or as the reversed original.

In the title-caption for 94 (see below) Rakusan used ぽんぽんダリヤ, ponpon dariya, 'pompon dahlia' as the name of this variety.Japanese ぽんぽん, ポンポン, ponpon, is borrowed from the flower form name pompon used in several Western languages. Rakusan used pompon dahlias in 94, 115-5, and 115.