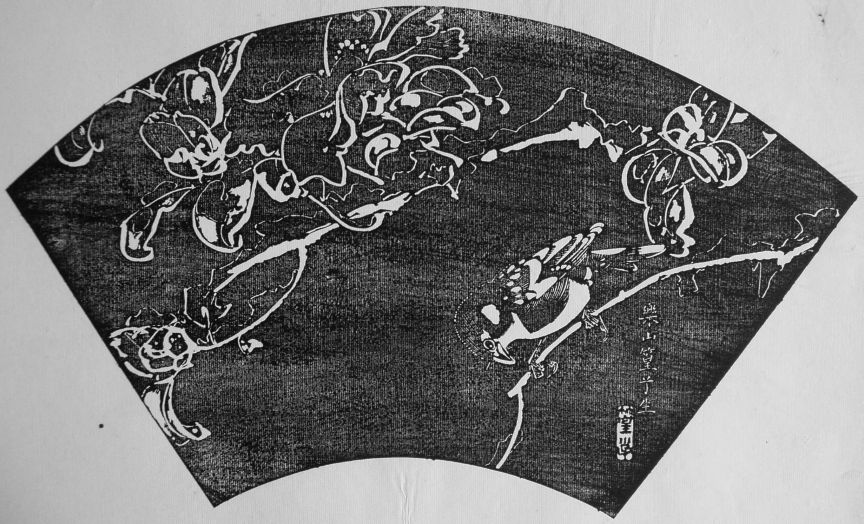 Sasanqua Camellia and Sparrow in Snow

Rakusan did not include the Fan Series in his main sequence numbering. Therefore, the original number used for each of the 36 Series prints has been modified to identify the Fan Series members of its theme. The five different fan silhouette shapes have been here assigned arbitrary numbers 1 through 5. To indicate a fan design these shape designations are added to the 36 Series number separated by a hyphen. 116-1 is the Fan Series design with fan shape 1 in the 116 Sasanqua Camellia and Winterberry theme. Like all other designs in this series, 116-1 was only produced in a single print run, and few copies are currently documented.

The 116 Sasanqua Camellia and Winterberry theme was prepared in two stages. Three of the five fan prints (including 116-1) have seal C, indicating that all of their wooden blocks were carved during the first half of 1934. Rakusan deliberately delayed printing for several months after those blocks were ready. The other two fan prints and the 36 Series design have seal B and were carved somewhat later and closer to the time of publication.

Description:
The composition of 116-1 includes a forked camellia branch with an open flower and three buds. The top surface of the branches has a thick coating of ice and snow. Perched on the lower fork of the branch is a sparrow. The camellia is rendered in a loose, painterly style as relatively simple line drawings which look equally well as ishizuri or in the original. The thin branches with ice and snow were painstakingly carved so that the correct light and dark patterns appear only in the original sketch. In the ishizuri version they are exactly opposite, and a bit confusing. On the other hand the patterns of the sparrow are correct only in the ishizuri version, indicating it was differently carved. This conflict of techniques suggests that 116-1 is an early, less-accomplished attempt at mastering the ishizuri technique.


Species Illustrated:
Sasanqua Camellia, Camellia sasanqua, is a winter-blooming species of camellia native to Japan which has been extensively selected and hybridized for color and for flower form. In Japanese it does not use the regular name for other camellias but has its own name, 山茶花, さざんか, サザンカ, sazanka. This Japanese name is the source of both the Latin species name and the English name, sasanqua. The form Rakusan selected for 5, 116, 116-1, 116-3, and 116-4, is a medium-sized, open flower of pink-blushed white, a type which is often informally called 'Apple Blossom' in English.

Although he had access to many varieties of camellias, Rakusan depicted only three different kinds in his woodblock prints, and examples each appear in the 36 Series. The other two kinds of Rakusan camellias are at numbers 126 and 129, which in turn link to their own additional related designs.

Eurasian Tree Sparrow, Passer montanus, is today written in Japanese ornithological texts as スズメ, suzume, where it refers only to this species. However, 雀, suzume, remains a very common general name for any sort of small sparrow or sparrow-like bird in modern Japanese.