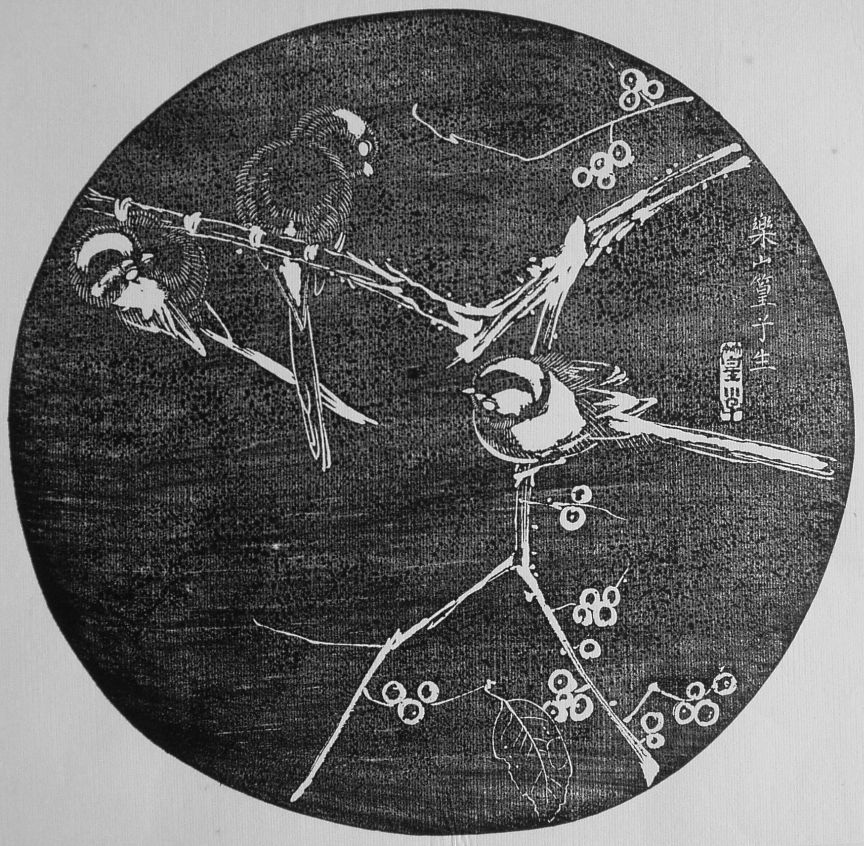 Rakusan did not include the Fan Series in his main sequence numbering. Therefore, the original number used for each of the 36 Series prints has been modified to identify the Fan Series members of its theme. The five different fan silhouette shapes have been here assigned arbitrary numbers 1 through 5. To indicate a fan design these shape designations are added to the 36 Series number separated by a hyphen. 116-5 is the Fan Series design with fan shape 5 in the 116 Sasanqua Camellia and Winterberry theme. Like all other designs in this series, 116-5 was only produced in a single print run, and few copies are currently documented.

The 116 Sasanqua Camellia and Winterberry theme was prepared in two stages. Three of the five fan prints (including 116-5) have seal C, indicating that all of their wooden blocks were carved during the first half of 1934. Rakusan deliberately delayed printing for several months after those blocks were ready. The other two fan prints and the 36 Series design have seal B and were carved somewhat later and closer to the time of publication.

Description:
The composition of 116-5 includes a forked winterberry branch with several berries and a single dried leaf. Perched on the branch are three long-tailed tits. The berries and branches are rendered in a loose, almost schematic fashion as relatively simple line drawings which look equally well as ishizuri or in the original. However, the birds are colored so that the correct light and dark patterns appear only in the original sketch. In the ishizuri version they are exactly opposite. Interestingly, each of the three winterberry designs in this theme has only a single winterberry leaf as a finely detailed line drawing.


Species Illustrated:
Japanese Winterberry, Ilex serrata var. sieboldii, 梅擬, うめもどき, ウメモドキ, ume-modoki, lit. 'pseudo-plum', is a kind of deciduous native holly. In the title-caption for 24 Rakusan uses the descriptor 大粒, oo-tsubu, lit. 'large-berry', apparently with the intention of indicating a kind of winterberry. That varietal name is not in current usage and the illustration is consistent with the usual subspecies.