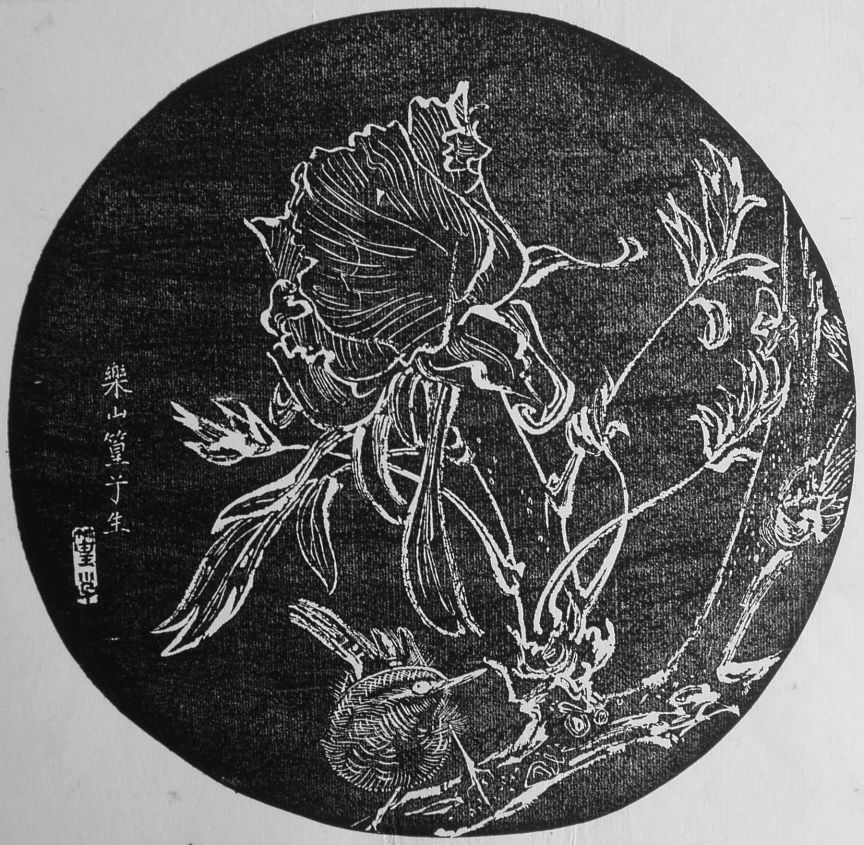 Rakusan did not include the Fan Series in his main sequence numbering. Therefore, the original number used for each of the 36 Series prints has been modified to identify the Fan Series members of its theme. The five different fan silhouette shapes have been here assigned arbitrary numbers 1 through 5. To indicate a fan design these shape designations are added to the 36 Series number separated by a hyphen. 117-5 is the Fan Series design with fan shape 5 in the 117 Winter Tree-peony theme. Like all other designs in this series, 117-5 was only produced in a single print run, and few copies are currently documented.

Theme History:
The 117 Winter Tree-peony theme is one of the many entirely regular themes represented by a complete fan quintet and a color woodblock print. The Fan Series designs of the 117 Winter Tree-peony theme were printed during September 1934 and were distributed September 15, 1934 as installment six (of twelve). On the delivery documents Rakusan used the theme subject title 寒牡丹, kanbotan, 'winter tree-peony' which is probably the original title of 36 Series design 117 published at the same time.

The pairing of the wren with the winter-blooming tree-peony is a traditional Japanese symbol of the winter season. It was also one of Rakusan's favorite subjects and he illustrated it in at least five surviving designs. The pairing occurs here not only in 117-5, but also in 117 and 11alt and 11.

117-5 and all but one of the other designs in the 117 Winter Tree-peony theme have seal C, including the 36 Series design 117. This suggests that all of their wooden blocks were carved during the first half of 1934. Rakusan deliberately delayed printing for several months after those blocks were ready. 117-1, the remaining design was carved later to complete infilling the quintet, perhaps only just before publication.

Description:
The composition of 117-5 includes a tree peony branch with a slightly opened bud. Perched on the branch is a wren. All of the design elements are rendered as detailed line drawings which look equally well viewed as ishizuri or in the original.


Species Illustrated:
Tree-peony, Paeonia suffruticosa, 牡丹, ぼたん, ボタン, botan, now comes in many colors, shapes, and varieties.
Winter-blooming Tree-peony, Paeonia suffruticosa var. hiberniflora, 寒牡丹, kan-botan; or 冬牡丹, fuyu-botan; both lit. 'winter tree-peony', is the earliest-blooming variety of tree-peony and typically begins to bloom before the winter snow has melted. Therefore, to protect the new growth the plants are typically staked and often protected from the weight of the snow by a woven grass mat as a kind of open tent structure.