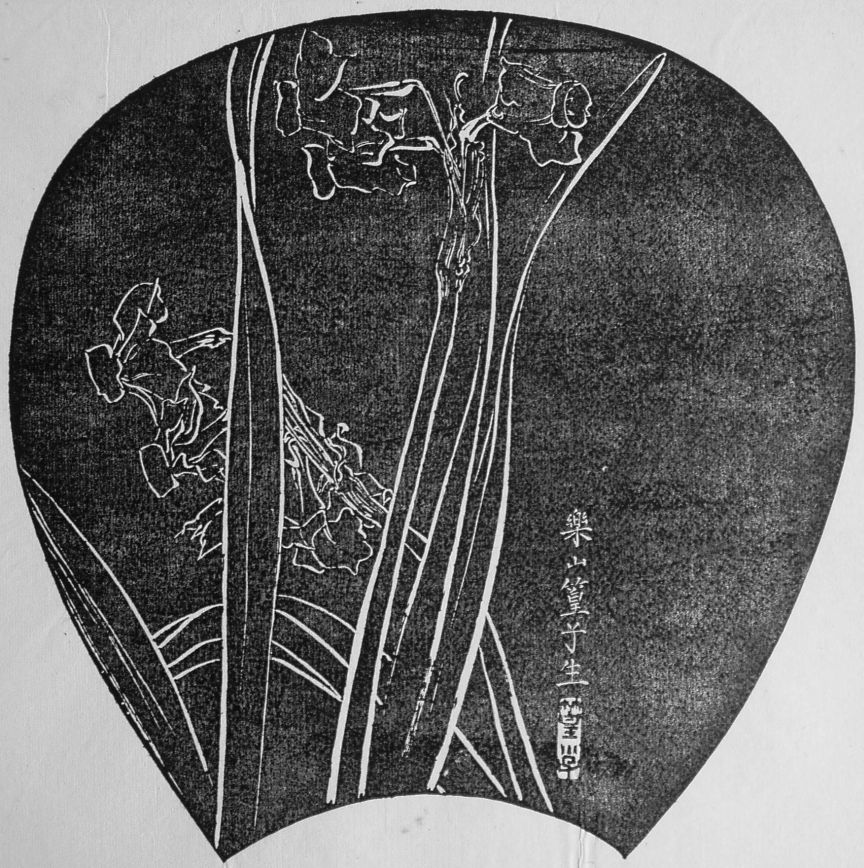 Rakusan did not include the Fan Series in his main sequence numbering. Therefore, the original number used for each of the 36 Series prints has been modified to identify the Fan Series members of its theme. The five different fan silhouette shapes have been here assigned arbitrary numbers 1 through 5. To indicate a fan design these shape designations are added to the 36 Series number separated by a hyphen. In themes which contain duplicated fan shapes, one has been arbitrarily designated A and the other B. 118-4 indicates that this is a Fan Series design with fan shape 4 in the 118 Winter Chrysanthemum and Narcissus theme. Like all other designs in this series, 118-4 was only produced in a single print run, and few copies are currently documented.

Description:
All of the fan designs in this theme show the botanical elements as line drawings. The woodblock print of 118-4 was modeled closely on an actual-size original sumi sketch which although lost can be reconstructed by digitally reversing the image of the woodblock print. The composition includes only two narcissus plants, a vertical one superimposed on one leaning to the left:
Species Illustrated:
Paperwhite Narcissus, Narcissus tazetta var. chinensis, 日本水仙, にほんすいせん, ニホンズイセン, nihon-suisen, lit. 'Japanese narcissus', is a bulb often used for forcing winter blooms indoors.
Related Designs: Other designs in the 118 Winter Chrysanthemum and Narcissus theme: