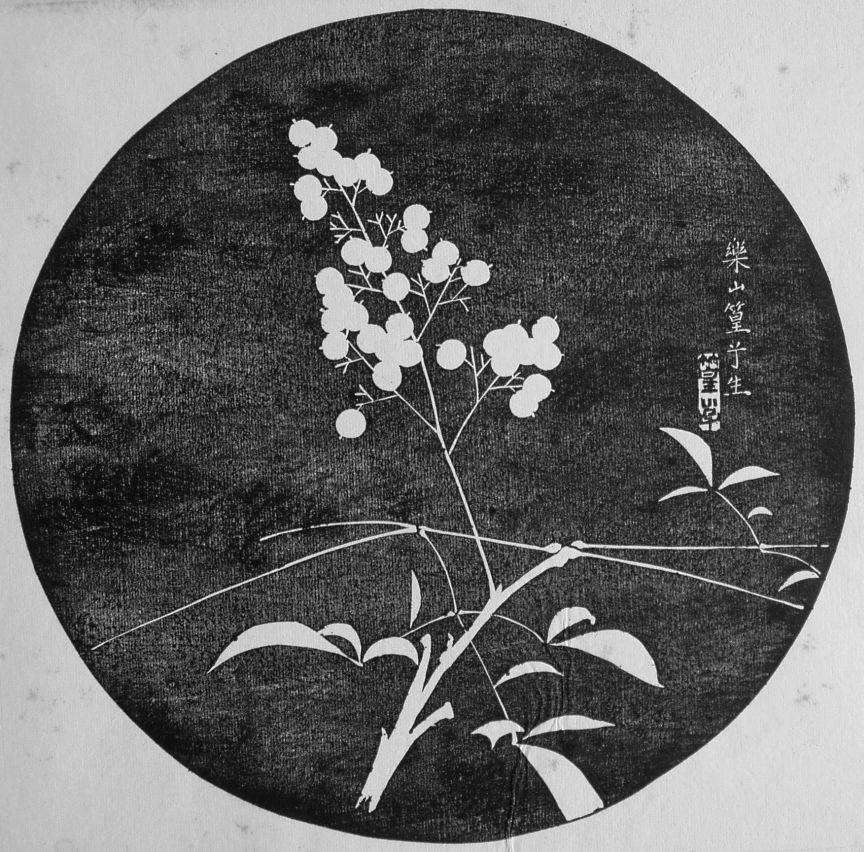 Rakusan did not include the Fan Series in his main sequence numbering. Therefore, the original number used for each of the 36 Series prints has been modified to identify the Fan Series members of its theme. The five different fan silhouette shapes have been here assigned arbitrary numbers 1 through 5. To indicate a fan design these shape designations are added to the 36 Series number separated by a hyphen. In themes which contain duplicated fan shapes, one has been arbitrarily designated A and the other B. 119-5 indicates that this is a Fan Series design with fan shape 5 in the 119 Nandina theme. Like all other designs in this series, 119-5 was only produced in a single print run, and few copies are currently documented.

Theme History:
The Fan Series delivery documents for installment six in September 1934 announced that nandina designs would be published the following month. Those for installment seven confirm that the Fan Series of the 119 Nandina theme were printed during October 1934 and distributed October 15, 1934 as part of installment seven (of twelve). On both sets of delivery documents Rakusan used the theme subject title 南天, nanten, 'nandina' which is the original title of 36 Series design 119 published at the same time.

The 119 Nandina theme theme includes only four fan designs, one less than the normal quintet. There are designs for fan shapes 1, 3, 4, and 5, but none for fan shape 2. Rakusan had originally planned the 119 Nandina theme to have its full complement of five designs. From the seal C markings, it appears that Rakusan created all four of the 119 Nandina theme fan designs (including 119-5) in the early part of 1934. The nandina fan designs were among several groups Rakusan then set aside, intending to complete each of them with additional designs later. (Closer to the time of publication, he painted 119-0 as the model for the 36 Series design 119 which has seal B.)

Although most such groups were indeed eventually infilled and published as regular themes, Rakusan modified his original plans for four of these incomplete groups. He decided to assemble installment seven using existing designs only. Since each installment was supposed to have three themes, two of the incomplete groups with four designs each (bamboo-grass and pine) were merged into a single compound theme with eight designs. To this he added the four nandina designs and the three tea flower designs to make up the required installment total. As a result, installment seven ended up with the advertised fifteen designs in three themes, but each of its themes, 119, 120, and 121, is exceptional; and none has a perfect quintet of designs.

Description:
At least some of the nandina designs may have been adapted from sketches originally created in the late 1920s during the planning of design 1 in the earlier 100 Series. (See links below.) All of the nandina fan designs are of terminal sprays including berries and are shown as stylized silhouettes.


Species Illustrated:
Nandina (Heavenly Bamboo), Nandina domestica, 南天, なんてん, ナンテン, nanten, is originally a Japanese native which now has many varieties and garden cultivars. It keeps its berries into the winter and is a traditional Japanese symbol of the winter season.
Related Designs: Other designs in the 119 Nandina theme:
Other designs with nandina: