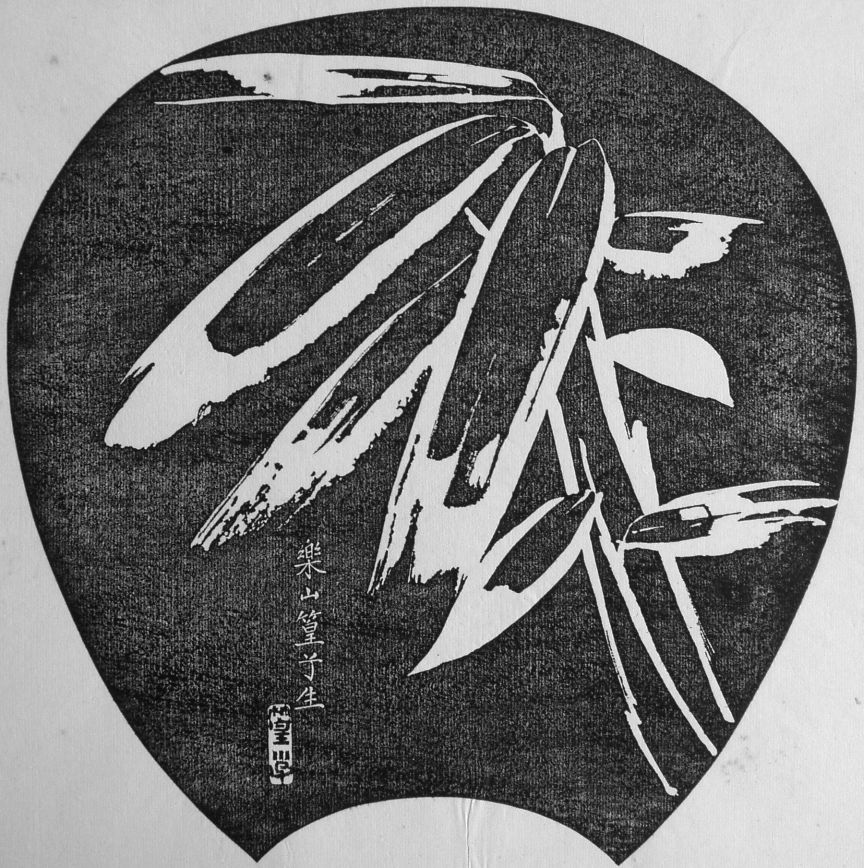 Rakusan did not include the Fan Series in his main sequence numbering. Therefore, the original number used for each of the 36 Series prints has been modified to identify the Fan Series members of its theme. The five different fan silhouette shapes have been here assigned arbitrary numbers 1 through 5. To indicate a fan design these shape designations are added to the 36 Series number separated by a hyphen. In themes which contain duplicated fan shapes, one has been arbitrarily designated A and the other B. 121-4B indicates that this is one of two Fan Series designs with fan shape 4 in the 121 Kumazasa Bamboo-grass and Pine theme. Like all other designs in this series, 121-4B was only produced in a single print run, and few copies are currently documented.

Theme History:
The 121 Kumazasa Bamboo-grass and Pine theme has a complex history, and it has more individual prints than any other theme. Rakusan had originally planned to have two separate themes, one for kumazasa bamboo-grass and one for pine. From the signature and seal markings, it appears that two of the pine fan designs were created at the end of 1933, and the other two pine designs and all four kumazasa bamboo-grass designs (including 121-4B) by early 1934. Then Rakusan set both incomplete groups aside for several months. Around the middle of 1934 Rakusan changed his original plan and combined the two as a single compound theme. He then painted 121-0 as the model for the 36 Series design 121 which included both original components.

Description:
The bamboo-grass Fan Series designs are unusual in that they are not negatively reversed compositions. In all four of these fan prints (including 121-4B) the areas of dark and light are as they are in nature, dark leaves with light margins and mostly light stems, just as on the 36 Series design 121. At least some of the bamboo-grass designs may have been adapted from sketches originally created in the late 1920s during the planning of design 93 (and possibly also of designs 6 and 87) in the earlier 100 Series. (See links below.)


Species Illustrated:
All species of bamboo-grass (also called dwarf bamboo) are called 笹, ささ, ササ, sasa. This Japanese name has been borrowed into scientific Latin as the genus name Sasa which has a much more restricted meaning. Kumazasa Bamboo-grass, Sasa veitchii , くまざさ, クマザサ, kumazasa, is a common species of dwarf bamboo which is cultivated both as an ornamental and as an ingredient in Asian herbal medicine. The Japanese name for this species has been borrowed into English as Kumazasa, Kuma Zasa, Kuma Bamboo-grass, etc. Today in Japanese the name is almost always written in kana, and there is dispute about the proper kanji etymology of kuma-zasa. Rakusan always used 熊笹, lit. 'bear-bamboograss', which is now considered to be a folk etymology. The modern interpretation is 隈笹, lit. 'shade-bamboograss'.

A former name for this same species, Sasa albomarginata, White-margin Bamboo-grass, refers to the tips and edges of the dark green leaves which turn creamy white with the onset of cold weather.