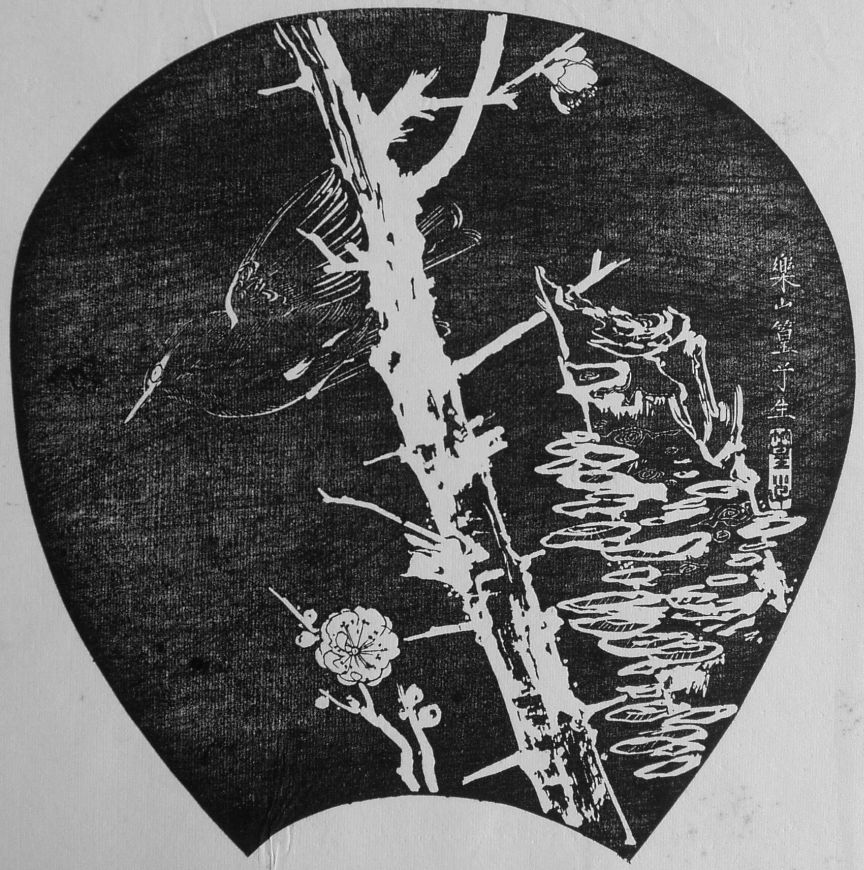 Rakusan did not include the Fan Series in his main sequence numbering. Therefore, the original number used for each of the 36 Series prints has been modified to identify the Fan Series members of its theme. The five different fan silhouette shapes have been here assigned arbitrary numbers 1 through 5. To indicate a fan design these shape designations are added to the 36 Series number separated by a hyphen. 122-4 is the Fan Series design with fan shape 4 in the 122 Wild Plum theme. Like all other designs in this series, 122-4 was only produced in a single print run, and few copies are currently documented.

Theme History:
The 122 Wild Plum theme is one of three different themes based on flowering plums. (The other two are 123 Red Plum and 124 Bonsai Plum.) Because the Fan Series prints for all three of these themes were delivered as a single installment, it can be very difficult to assign the individual, loose, flowering plum designs to their appropriate themes. In monochrome prints the color of plum blossoms is uncertain, and of course a bonsai plum can be any color. [The theme assignment of 122-4 is uncertain, and it is possible that the designs currently labeled 122-4 and 123-4 should be exchanged.] Although there are a total of fifteen plum fan designs divided among the three themes, it remains possible that the number of designs in each may be irregular. However, there are exactly three designs of each fan shape, and there is no evidence that the installment consists of anything other than three entirely regular themes each with a complete fan quintet.

The individual designs were completed in at least two different stages. The theme assignment issues and the signature and seal markings of the flowering plum designs suggest that their Fan Series prints are best considered together as a single unit of fifteen designs. Fully thirteen of the fifteen Fan Series designs (including 122-4) have seal C which indicates a carving date during the first half of 1934. The other two fan designs have rare minor seals whose carving periods remain to be determined, one example each of seal Q and seal R. They may in fact both also be from within the same major seal C period (which would make all of the plum fan designs contemporaneous). After preparing the wooden blocks for these relatively early designs, Rakusan set them aside for several months. Two of the three 36 Series flowering plum designs, 122 and 123, have seal B which indicates they were not carved until the following period, and perhaps not until shortly before their publication with the Fan Series designs later in the year. The third 36 Series flowering plum design, 124, is the sole woodblock print example of minor seal D whose carving period is indeterminate between the sequential major seal C and seal B periods.

Description:
The composition of 122-4 includes three old branches of a flowering plum. Flying just behind the middle branch is a bush warbler. The thick branch on the right holds a heavy growth of shelf fungus. All of the elements are carved in great detail.

The old growth of these trees is often embellished with lichen and fungi in these prints, and a few have evidence of small animal life. In 122-4 there is shelf fungus growing on the left branch.

Japanese Bush Warbler (Japanese Nightingale), Cettia diphone, 鴬, うぐいす, ウグイス, uguisu, is a common native bird beloved for its sweet song. It is frequently depicted in art, and it has many literary and poetic names. Rakusan used more than one name for this species. (For a fuller discussion of the Bush Warbler names see 4 in the 100 Series.)