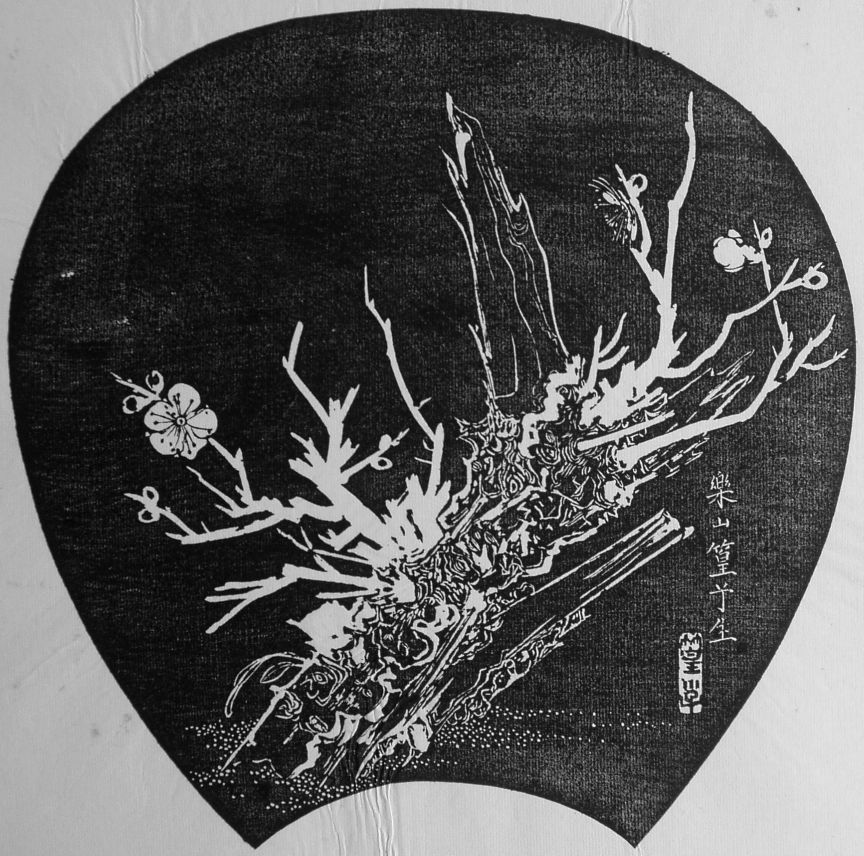 Rakusan did not include the Fan Series in his main sequence numbering. Therefore, the original number used for each of the 36 Series prints has been modified to identify the Fan Series members of its theme. The five different fan silhouette shapes have been here assigned arbitrary numbers 1 through 5. To indicate a fan design these shape designations are added to the 36 Series number separated by a hyphen. 124-4 is the Fan Series design with fan shape 4 in the 124 Bonsai Plum theme. Like all other designs in this series, 124-4 was only produced in a single print run, and few copies are currently documented.

Theme History:
The 124 Bonsai Plum theme is one of three different themes based on flowering plums. (The other two are 122 Wild Plum and 123 Red Plum.) Because the Fan Series prints for all three of these themes were delivered as a single installment, it can be very difficult to assign the individual, loose, flowering plum designs to their appropriate themes. In monochrome prints the color of plum blossoms is uncertain, and of course a bonsai plum can be any color. Although there are a total of fifteen plum fan designs divided among the three themes, it remains possible that the number of designs in each may be irregular. However, there are exactly three designs of each fan shape, and there is no evidence that the installment consists of anything other than three entirely regular themes each with a complete fan quintet.

Theme assignments of the Fan Series designs in the 124 Bonsai Plum theme are the most secure of any of the plum themes. As the only fan shape 1 design without an incorporated theme title, by default 124-1 belongs here. 124-2 is the only weeping flowering plum Fan Series design, but although it corresponds closely to 36 Series design 124, it remains possible that it could be exchanged with the current 123-2. Illustrating the entire specimen (and the ground surface) in 124-1, 124-3, 124-4, and 124-5 confirms that these are miniature trees. The sizes of the bamboo supports in 124-5 and 124 also reinforce the suggestion of a small scale.

The individual designs were completed in at least two different stages. The theme assignment issues and the signature and seal markings of the flowering plum designs suggest that their Fan Series prints are best considered together as a single unit of fifteen designs. Fully thirteen of the fifteen Fan Series designs (including 124-4) have seal C which indicates a carving date during the first half of 1934. The other two fan designs have rare minor seals whose carving periods remain to be determined, one example each of seal Q and seal R. They may in fact both also be from within the same major seal C period (which would make all of the plum fan designs contemporaneous). After preparing the wooden blocks for these relatively early designs, Rakusan set them aside for several months. Two of the three 36 Series flowering plum designs, 122 and 123, have seal B which indicates they were not carved until the following period, and perhaps not until shortly before their publication with the Fan Series designs later in the year. The third 36 Series flowering plum design, 124, is the sole woodblock print example of minor seal D whose carving period is indeterminate between the sequential major seal C and seal B periods.

Rakusan was aware of the problem of theme assignment for the individual flowering plum Fan Series designs. He decided to label the first Fan Series print of two of the three themes with a theme title incorporated into the design. Because Rakusan put these exceptional titles on designs of the same fan shape, that shape was defined here as fan shape 1. Rakusan was otherwise relying only on his original distribution arrangement to keep the themes separate. He would have arranged the prints so that the subscriber received each of the three theme sets in the proper order with each of the first two themes beginning with a fan shape 1 design with a title. (The 124 Bonsai Plum theme has no title on its fan shape 1 design.) Unfortunately, since the prints were delivered loose, and were thus easily rearranged, that original delivery order has not been reliably preserved in any surviving collection.

Description:
The composition of 124-4 includes an entire dwarfed flowering plum. The old growth has a heavy covering of lichen, moss, or fungus. The ground surface is indicated by patterns of small dots. The new growth is rendered in a roughly flowing, silhouetted style, and the rest of the composition is a very detailed line drawing.

The title 盆梅, bon-bai, 'bonsai plum' (literally 'tray plum'), refers not to a kind of plum, but rather to how the individual specimen has been grown. Bonsai are either naturally stunted or deliberately dwarfed trees grown in shallow trays.

The old growth of flowering plum trees is often embellished with lichen and fungi in these prints. In 124-4 there is a heavy growth of these epiphytes.