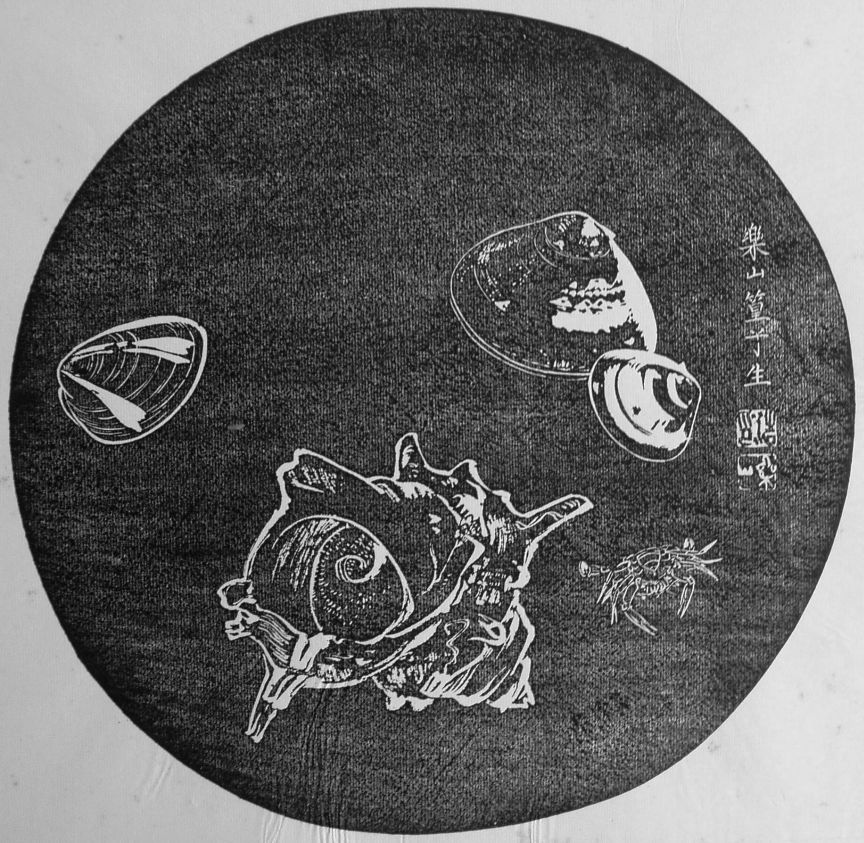 Rakusan did not include the Fan Series in his main sequence numbering. Therefore, the original number used for each of the 36 Series prints has been modified to identify the Fan Series members of its theme. The five different fan silhouette shapes have been here assigned arbitrary numbers 1 through 5. To indicate a fan design these shape designations are added to the 36 Series number separated by a hyphen. 127-5 is the Fan Series design with fan shape 5 in the 127 Shrimp and Clam theme. Like all other designs in this series, 127-5 was only produced in a single print run, and few copies are currently documented. All of the Fan Series prints were originally distributed tipped into recessed wells of presentation sheets with the overall project title, 篁子生画選, Koushisei Gasen, embossed in their lower margins.

Theme History:
The 127 Shrimp and Clam theme is one of the many entirely regular themes represented by a complete fan quintet and a color woodblock print. Three of the five fan designs have seal C which indicates a carving date before the end of the first quarter of 1934. Despite the early completion of those wooden blocks, Rakusan delayed printing and distribution of the prints in what became the 127 Shrimp and Clam theme for several months. It was eventually grouped with other winter season themes nearer to the end of the series. One fan design (127-3) has seal R which is a rare minor seal whose carving period has yet to be established. The remaining fan design (127-5) and the 36 Series design 127 both have seal B which indicates a later carving period closer to the time of publication.

On the installment eight folio Rakusan announced the title of theme 127 as 鰕に蛤, ebi ni hamaguri, loosely 'shrimp and clams'; and this original title is also used here as the theme name. The Japanese name 蝦, (also written 海老, 蛯, 螧, えび, エビ), ebi, is a general name for all lobsters, prawns, shrimp, and crayfish; but the meaning does not include crabs. Because there is no English word with equivalent scope, for convenience here only 蝦, ebi, in the theme name is translated as 'shrimp' which is the historical meaning of that kanji.

Description:
The composition of 127-5 includes three clams, a horned turban shell, and a tiny blue crab. Since the surface is not indicated, this could either be a studio-assembled still-life, or be intended as animals found on a beach. The view inside the turban shell shows that the animal is still inside. From the sizes of the mollusks, the crab must be very a young juvenile. (Adult crabs of the same species are shown in 127-3.) The tiny crab is upside down, which permits it to be sexed as female, but that position may also indicate that it is dead. All of the elements are painstakingly carved so that the ishizuri version is an exact negative of the original sketch.