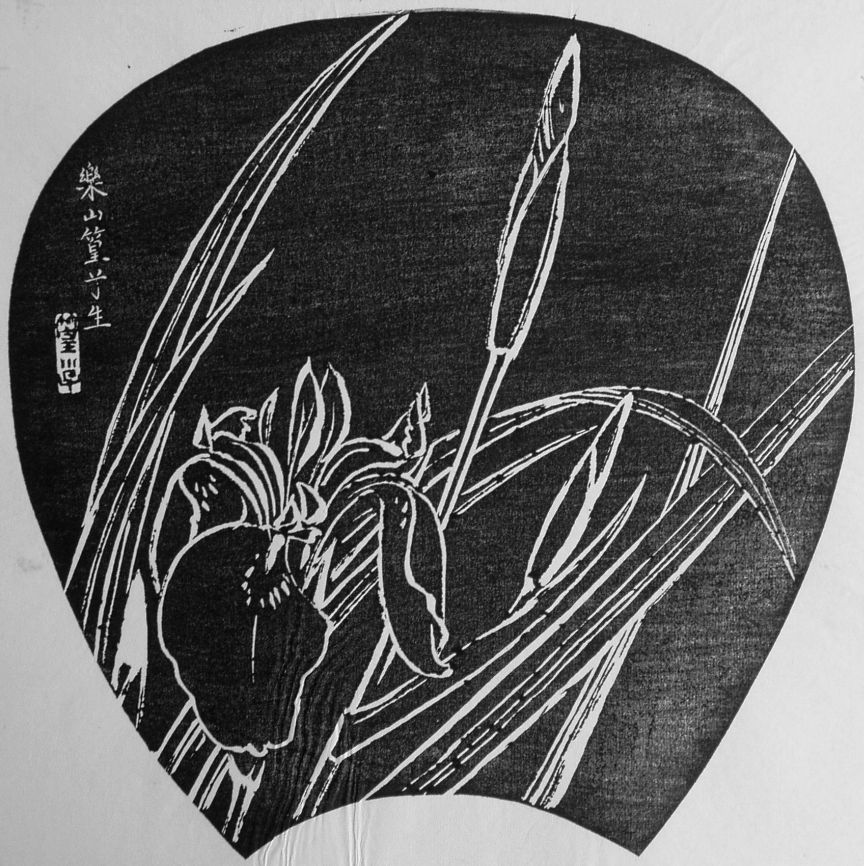 Rakusan did not include the Fan Series in his main sequence numbering. Therefore, the original number used for each of the 36 Series prints has been modified to identify the Fan Series members of its theme. The five different fan silhouette shapes have been here assigned arbitrary numbers 1 through 5. To indicate a fan design these shape designations are added to the 36 Series number separated by a hyphen. 128-4 is the Fan Series design with fan shape 4 in the 128 Japanese Iris theme. Like all other designs in this series, 128-4 was only produced in a single print run, and few copies are currently documented.

Theme History:
The 128 Iris theme is one of the many entirely regular themes represented by a complete fan quintet and a color woodblock print. All five of the Fan Series designs in the 128 Japanese Iris theme (including 128-4) have seal C which indicates a carving date in the period between late 1933 and the end of the first quarter of 1934. Despite the early completion of those wooden blocks, Rakusan delayed printing and distribution of the prints in this theme until the following year. Publication of the 128 Japanese Iris theme was combined with two other spring season themes nearer to the end of the series. The 36 Series design 128 has seal B which indicates a later carving period closer to the time of publication.

Description:
The composition of 128-4 includes a clump of iris with an open flower and three buds. All of the fan prints in the 128 Iris theme are rendered as detailed line drawings with many interior lines within the leaves and petals. Unusually for this theme, 128-4 has one bud with solid color petals (at lower left). Both of these techniques work equally well as ishizuri or reversed, but in this theme it is unexpected that both are used within the same design.


Species Illustrated:
Japanese Iris, Iris ensata var. ensata, 花菖蒲, はなしょうぶ, ハナショウブ, hana-shoubu, is a wetlands iris native to Japan. Japanese iris has been bred into numerous garden forms which are grown in temperate zones throughout the world. There are many Japanese names for kinds of iris, and considerable hybridizing and selection have linked the original individual species into a complex continuum.
Related Designs: Other designs in the 128 Japanese Iris theme:
Other designs with Japanese iris:
Other designs with different kinds of iris: