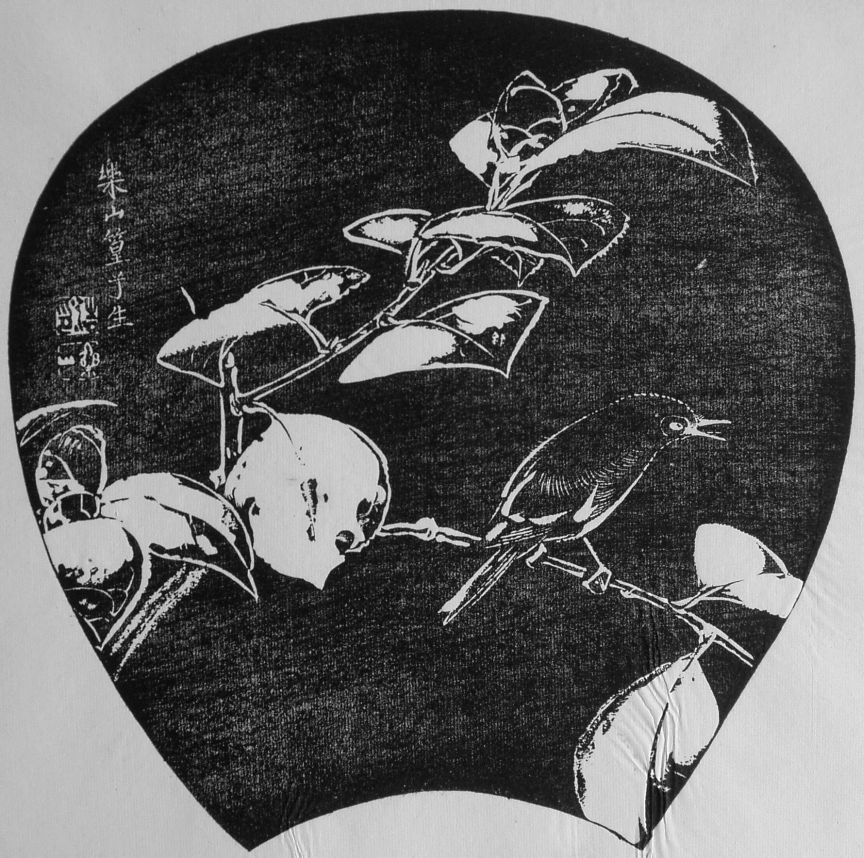 Rakusan did not include the Fan Series in his main sequence numbering. Therefore, the original number used for each of the 36 Series prints has been modified to identify the Fan Series members of its theme. The five different fan silhouette shapes have been here assigned arbitrary numbers 1 through 5. To indicate a fan design these shape designations are added to the 36 Series number separated by a hyphen. 129-4 is the Fan Series design with fan shape 4 in the 129 Double Camellia theme. Like all other designs in this series, 129-4 was only produced in a single print run, and few copies are currently documented.

Theme History:
The 129 Double Camellia theme is one of the many entirely regular themes represented by a complete fan quintet and a color woodblock print. The prints in the 129 Double Camellia theme represent two distinct carving periods. Two of the five Fan Series designs have seal C which indicates carving dates between the last months of 1933 and the end of the first quarter of 1934. Despite the early completion of those wooden blocks, Rakusan delayed printing and distribution until the following year. The 129 Double Camellia theme was eventually grouped with other spring season themes near the end of the series. The other three fan designs (including 129-4) and the 36 Series 129 have seal B which indicate a later carving period closer to the time of publication.

According to the delivery documents for Fan Series installment ten, the woodblock prints of the 129 Double Camellia theme were printed in March 1935 and distributed March 25, 1935 in installment ten (of twelve). The series as originally announced would have seen this installment published in October 1934, but there had previously been several delays and skipped delivery months. On these documents Rakusan used 八重椿, yae tsubaki, 'double camellia', as the theme title and also as the title of 36 Series design 129 published at the same time.

At least some of the double camellia designs in this theme were adapted from sketches originally created in the late 1920s during the planning of design 26 in the earlier 100 Series (see below).

Description:
The composition of 129-4 includes a single forking camellia branch with two terminal buds. Sitting on a side branch is a white-eye. All of the elements are rendered as line drawings. However, the mottling of the foliage includes solid patches. Both work equally well as ishizuri or reversed.


Species Illustrated:
Japanese Camellia, Camellia japonica, 椿, つばき, ツバキ, tsubaki, has been extensively hybridized and selected to modify its flower-form, habit, and blooming time. As the name implies, it is a Japanese native species which still grows wild as well as in gardens. For 129 and the other designs in the 129 Double Camellia theme, and 26 in the 100 Series, Rakusan illustrates a large, fully-double, red and white bicolor flower, of an unidentified hybrid variety. In all of the designs the leaves have an unhealthy looking mottling which appears characteristic of this particular variety. In the title-caption for 26 Rakusan uses the descriptor 八重, yae, lit. 'eight-fold', which is a conventional way of describing flowers with multiple ranks of petals, i.e. a double flower. Therefore, what Rakusan used is a name for a general type of bloom and not the name of any particular variety. From the mid spring season mentioned at 26, and associations with warm weather insects in other designs in this theme, this double camellia variety is the latest blooming of the camellias that Rakusan illustrates.

Although he had access to many varieties of camellias, Rakusan depicted only three different kinds in his woodblock prints, and examples of each appear as themes. Links to the other two kinds of Rakusan camellias are at numbers 116 and 126, which in turn link to their own additional related designs.