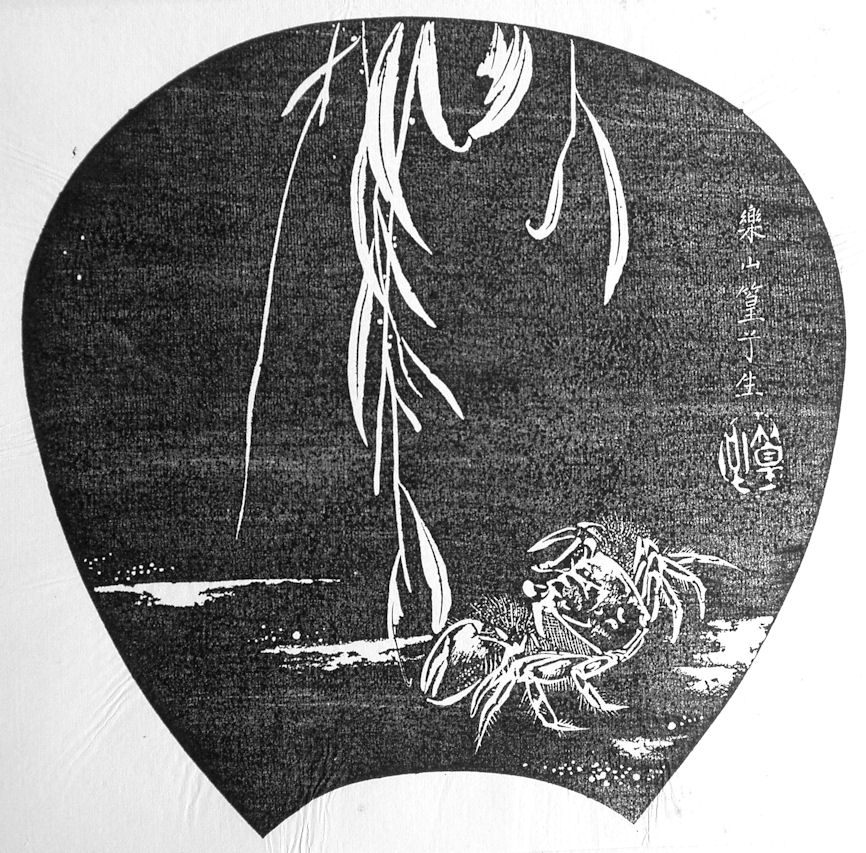 Rakusan did not include the Fan Series in his main sequence numbering. Therefore, the original number used for each of the 36 Series prints has been modified to identify the Fan Series members of its theme. The five different fan silhouette shapes have been here assigned arbitrary numbers 1 through 5. To indicate a fan design these shape designations are added to the 36 Series number separated by a hyphen. 131-4 is the Fan Series design with fan shape 4 in the 131 Freshwater Crab theme. Like all other designs in this series, 131-4 was only produced in a single print run, and few copies are currently documented.

The signature and seal markings suggest that the designs in the 131 Freshwater Crab theme were produced in at least two stages. Two of the five fan designs in this theme have seal C which indicates a carving date during the first half of 1934. Despite the early completion of some of its wooden blocks, Rakusan delayed printing and distribution of the prints in what became the 131 Freshwater Crab theme until the following year. It was eventually grouped with other summer season themes nearer to the end of the series. Two other fan designs and the 36 Series design 131 have seal B which suggests those designs were carved closer to the time of publication. However, 131-4 has rare minor seal Q whose major seal carving period remains to be determined.

Description:
The composition of 131-4 includes one small very hairy river crab and several pendant branches of weeping willow. The ground surface is suggested by solid patches with indistinct edges and by patterns of small dots. Other small dots appear near the willow branches, but it is unclear if they are intended to be anything other than decoration. All of the elements are rendered in a very loose style with lines and shading closely mirroring the original sketch. The result works equally well as ishizuri or reversed.

Weeping Willow, Salix babylonica, 枝垂(れ)柳, しだれやなぎ, シダレヤナギ, shidare-yanagi, lit. 'weeping willow', is a very common willow species in Japan. Weeping Willow was introduced into Japan hundreds of years ago from China. Like English, Japanese has a general name for 'willow', 柳, 楊, 楊柳, やなぎ, ヤナギ, yanagi, which may also be used to refer in particular to the Weeping Willow. However, the descriptor 枝垂(れ), (枝)垂れ, しだれ, シダレ, shidare, which refers to any tree with a weeping (pendulous) habit, is often added (as here) for clarity of reference. The form of the willow name supplied in this title is taken from the original Rakusan title-caption of 100 Series design 65.