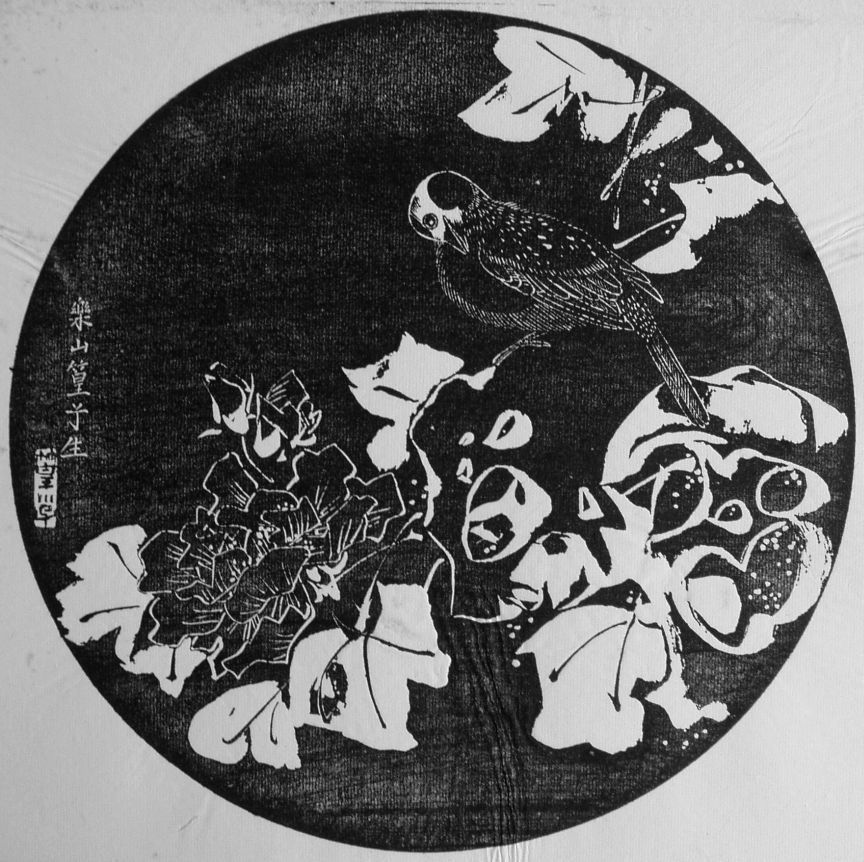 Rakusan did not include the Fan Series in his main sequence numbering. Therefore, the original number used for each of the 36 Series prints has been modified to identify the Fan Series members of its theme. The five different fan silhouette shapes have been here assigned arbitrary numbers 1 through 5. To indicate a fan design these shape designations are added to the 36 Series number separated by a hyphen. 132-5 is the Fan Series design with fan shape 5 in the 132 Changeable Rosemallow theme. Like all other designs in this series, 132-5 was only produced in a single print run, and few copies are currently documented.

The signature and seal markings suggest that the designs in the 132 Changeable Rosemallow theme were produced in at least two stages. Three of the five fan designs in this theme (including 132-5) and the 36 Series design 132 have seal C which indicates a carving date during the first half of 1934. Despite the early completion of some of its wooden blocks, Rakusan delayed printing and distribution of the prints in what became the 132 Changeable Rosemallow theme until the following year. It was eventually grouped with other summer season themes nearer to the end of the series. The other two fan designs have seal B which suggests that those designs were carved closer to the time of publication.

In the 132 Changeable Rosemallow theme, four of the five Fan Series designs (including 132-5) are taken directly from TBS, and the other is an original design in the TBS style. The 36 Series design 132 is entirely a Rakusan original composition in his own style and only the subjects are borrowed from TBS.

Description:
The entire composition of 132-5 is taken directly from a version of the TBS design shown below. The original TBS design shows a great tit preening while sitting on a decorative igneous rock. Several sprays of a rose (Rosa) are visible behind the rock. The rock is vesicular basalt or scoria which solidified with inclusions of bubbles. A section of TBS is devoted to rocks of this type used decoratively in gardens. Although Rakusan closely matched the style and composition of the TBS sketch, he changed the kind of flower and leaves from a rose to a rosemallow to make the design fit within this theme. He retained the original placement of stems, leaves, and flower; but he shifted the location of the flower bud and added another. The bird and the blossom parts are very finely scribed, and the rest of the elements are in a very loose, silhouetted style: The woodblock print of 132-5 was modeled closely on an actual-size original sumi sketch which although lost can be reconstructed by digitally reversing the image of the woodblock print:
Species Illustrated:
Changeable Rosemallow, Hibiscus mutabilis, 酔芙蓉, すいふよう, スイフヨウ, sui-fuyou, is a distinctive shrub whose flowers open white and change to pink and then rose as the blossoms age. 酔, すい, スイ, sui, here means ‘intoxicated’; presumably for the gradual reddening of the flower. All of the examples in the 132 Changeable Rosemallow theme, including 132, show fully double flowers, but single flowers also occur. It was often grown in gardens in the southern United States where it received many of its English common names including also Confederate Rose, Cotton Rosemallow, and Flowering Cotton. (The cotton plant grown commercially for fiber is a related species.)

Great Tit, Parus major, is 四十雀, しじゅうから, シジュウカラ, shijuu-kara (or しじゅうがら, シジュウガラ, shijuu-gara), lit. '40 tit'. The artist of the version of the illustrated TBS print took liberties with the coloration of the tit and made it more colorful. Rakusan copied only the elaboration of the head patterns in his monochrome rendition.