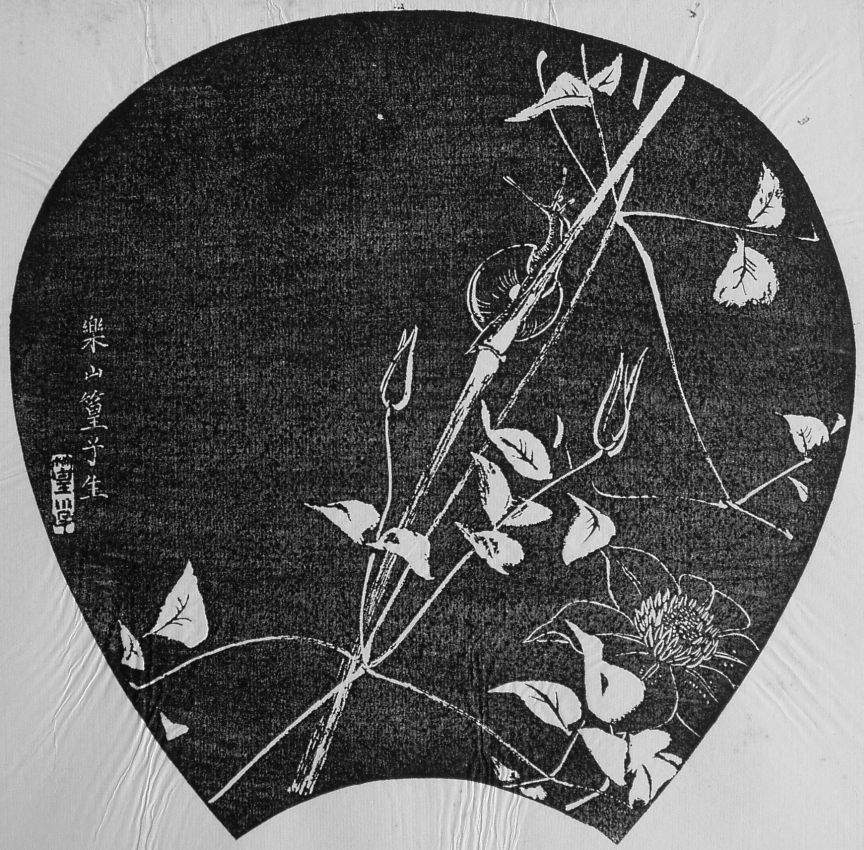 Rakusan did not include the Fan Series in his main sequence numbering. Therefore, the original number used for each of the 36 Series prints has been modified to identify the Fan Series members of its theme. The five different fan silhouette shapes have been here assigned arbitrary numbers 1 through 5. To indicate a fan design these shape designations are added to the 36 Series number separated by a hyphen. 133-4 is the Fan Series design with fan shape 4 in the 133 Clematis theme. Like all other designs in this series, 133-4 was only produced in a single print run, and few copies are currently documented.

The signature and seal markings suggest that the designs in the 133 Clematis theme were produced in at least two stages. Two of the five fan designs in this theme (including 133-4) and the 36 Series design 133 have seal C which indicates a carving date during the first half of 1934. Despite the early completion of some of its wooden blocks, Rakusan delayed printing and distribution of the prints in what became the 133 Clematis theme until the following year. It was eventually grouped with other summer season themes nearer to the end of the series. The other three fan designs have seal B which suggests that those designs were carved closer to the time of publication.

In the 133 Clematis theme, three of the five Fan Series designs are taken directly from TBS, and the other two (including 133-4) are original designs which are only partially in the TBS style. The 36 Series design 133 is also taken in part from TBS, but has been adapted in Rakusan's own style.

Description:
133-4 is an original Rakusan composition, and only the style of the leaves recalls TBS. The design shows a land snail climbing a bamboo stake. A stem of a clematis vine with a flower and two buds is twining up the stake. The inclusion of a bamboo support for the vine indicates a garden setting. The snail, the stake, and the blossom parts are very finely scribed, and the rest of the elements are in a very loose, silhouetted style. The rendering style of the open flower is Rakusan's own, and it is also used in 133-1, 133-2, and the 36 Series design 133.


Species Illustrated:
Chinese Clematis (Leather Flower), Clematis florida, 鉄線, てっせん, テッセン, tessen, is a common garden flower in Japan. Today, with the many hybrid varieties, all clematis may be referred to as くれまちす, クレマチス, kuremachisu, from the Latin and English names. The original species Rakusan illustrates here has pale blue flowers.

The land snail shown in 106-2 has a distinctive dark central stripe which suggests one of species of the endemic Japanese arboreal land snail genus Euhadra, often called in English 'bush snails'. It may be Euhadra amaliae, 口紅蝸牛, クチベニマイマイ, kuchibenimaimai, lit. 'lipstick snail'. The general name for any kind of snail (i.e. a member of the molluscan class Gastropoda) is 蝸牛, かたつむり, カタツムリ, katatsumuri. However when used without a qualifier, the name is more often applied to land snails than to marine or freshwater species, and the general name is often applied informally to this species and to other bush snails.