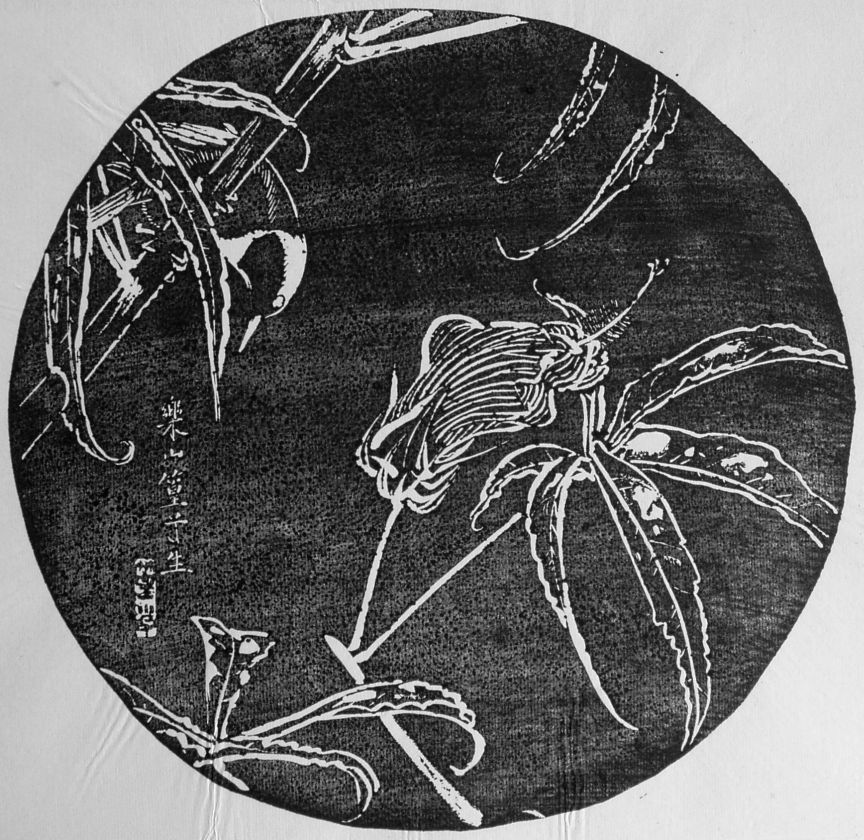 Rakusan did not include the Fan Series in his main sequence numbering. Therefore, the original number used for each of the 36 Series prints has been modified to identify the Fan Series members of its theme. The five different fan silhouette shapes have been here assigned arbitrary numbers 1 through 5. To indicate a fan design these shape designations are added to the 36 Series number separated by a hyphen. 134-5 is the Fan Series design with fan shape 5 in the 134 Sichuan Mallow theme. Like all other designs in this series, 134-5 was only produced in a single print run, and few copies are currently documented.

Theme History:
The 134 Sichuan Mallow theme is one of the many entirely regular themes represented by a complete fan quintet and a color woodblock print. All five Fan Series designs in this theme (including 134-5) have seal C which indicates a carving date between the last quarter of 1933 and the first quarter of 1934. Despite the early completion of its Fan Series wooden blocks, Rakusan delayed printing and distribution of the prints in what became the 134 Sichuan Mallow theme until the following year. The 36 Series design 134 has seal B which indicates a later carving period closer to the time of publication.

Description:
The composition of 134-5 includes two or three branches of red swamp mallow including leaves and a distinctive spent flower. Sitting on one of the branches at upper left is a varied tit. The plant is rendered as a detailed line drawing which looks equally well as ishizuri or reversed. However, the tit is drawn to look natural in the reversed image.


Species Illustrated:
Red Swamp Mallow (Scarlet Rosemallow, Texas Star), Hibiscus coccineus, is native to the southeastern United States and has many English common names. It has become a favorite exotic garden plant in Asia because of its brilliant scarlet red flowers and its interesting, highly-dissected leaves.

When Rakusan wrote the title-caption for 57, he used an older name for Red Swamp Mallow, 紅蜀葵, こうしょっき, コウショッキ, kou-shok-ki, lit. 'red Sichuan mallow'. This name plays on the resemblance of that species to Sunset Muskmallow, Ablemoschus manihot, which also appears in this theme. Sunset Muskmallow is native to parts of Sichuan - hence its Chinese name taken over into Japanese, 黄蜀葵, おうしょっき, オウショッキ, ou-shok-ki, lit. 'yellow Sichuan mallow'. However, today the most common Japanese name for Red Swamp Mallow is based on the supposed similarity to the Japanese maple in red autumn colors, 紅葉葵, もみじあおい, モミジアオイ, momiji-aoi, lit. 'red-leaf (i.e. maple) mallow'.

These two plants resemble one another and are in the same Malvaceae (Mallow) family, although they are in different genera and are not actually very closely related. Although the stems and dissected, palmate, leaves of the two plants look almost exactly the same, the shapes and colors of the five-petaled flowers are different. Notably the pistils are of different lengths, and where the pistil is shown, the species identification is clear in all flower forms.

Designs 134, 134-1, and 134-5 (as well as 57) are Hibiscus coccineus whose flowers have pointed, well-separated, dark petals with very long pistils. (In color the flowers are scarlet or crimson red and star-shaped.)

Designs 134-2, 134-3, and 134-4 are Ablemoschus manihot whose flowers have rounded, overlapping, pale-colored petals with dark centers, and short pistils. (In color the flowers are a creamy yellow with a maroon center.)

The flowers of Red Swamp Mallow are short-lived. When the bloom is finished, the petals recurl around the base, leaving the long pistil protruding. It is this final stage which is shown in 134-5, as well as in 134-1 and one of the blossoms in 134.