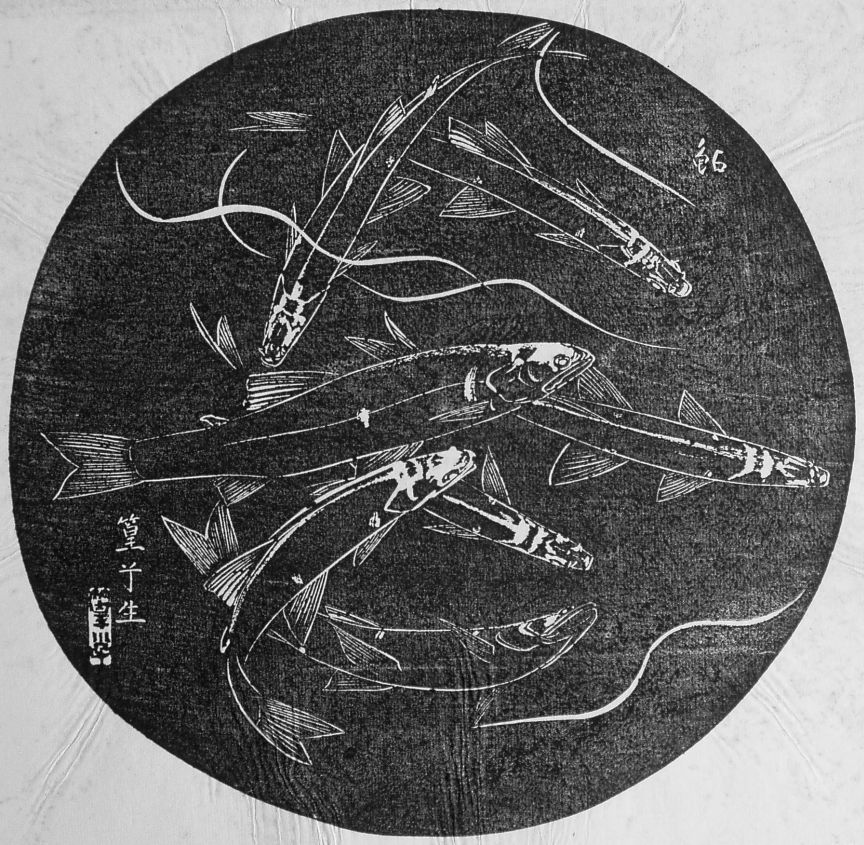 Rakusan did not include the Fan Series in his main sequence numbering. Therefore, the original number used for each of the 36 Series prints has been modified to identify the Fan Series members of its theme. The five different fan silhouette shapes have been here assigned arbitrary numbers 1 through 5. To indicate a fan design these shape designations are added to the 36 Series number separated by a hyphen. 135-5 is the Fan Series design with fan shape 5 in the 135 Fish theme. Like all other designs in this series, 135-5 was only produced in a single print run, and few copies are currently documented.

Theme History:
The 135 Fish theme is one of the many entirely regular themes represented by a complete fan quintet and a color woodblock print. Four of the five fan designs in this theme (including 135-5) have seal C which indicates a carving date before the end of the first quarter of 1934. The remaining fan design (135-1) has seal R which is a rare minor seal whose carving period has yet to be established. Despite the early completion of many of its wooden blocks, Rakusan delayed printing and distribution of the prints in what became the 135 Fish theme until the following year. It was eventually grouped with other summer season themes at the end of the series. Use of seal B on the 36 Series design 135 suggests it was carved later than the fan prints and closer to the time of publication.

Description:
The composition of 135-5 includes seven sweetfish rendered as detailed line drawings which look equally well as ishizuri or reversed. Five wavy lines indicate that the fish are alive and swimming in the water. Most of the fish are seen from above, and other aspects have been included to aid in recognition of the kind of fish. In the upper right Rakusan has incorporated a title, 鮎, ayu, 'sweetfish'.


Species Illustrated:
Sweetfish (or Ayu), Plecoglossus altivelis, 鮎, 香魚, 年魚, あゆ, アユ, ayu, is a kind of small, amphidromous trout found in many Japanese rivers, including those near Kyoto. The Japanese name is now often used as well in English. It is excellent eating and much sought after.
Related Designs: Other designs in the 135 Fish theme: