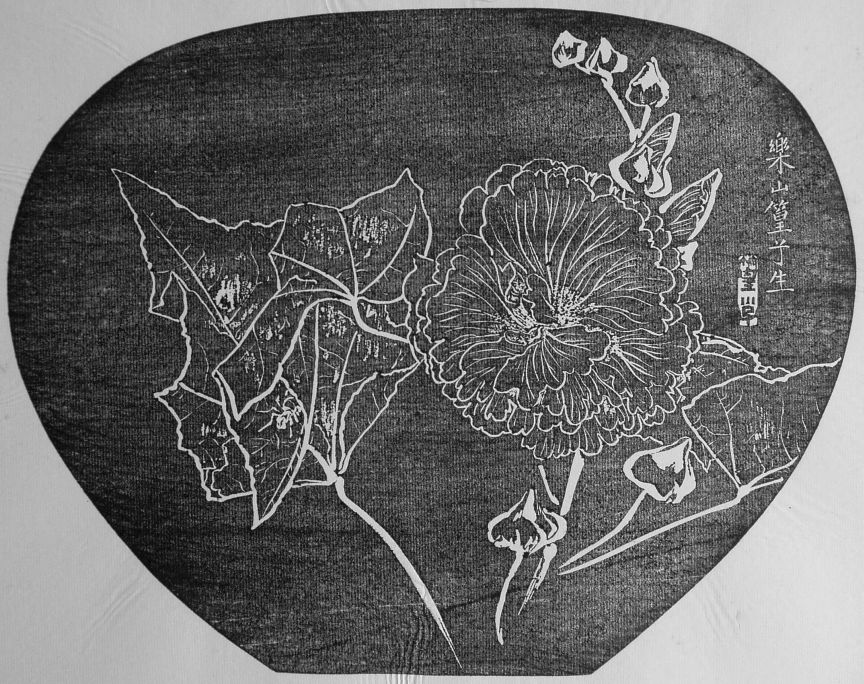 Rakusan did not include the Fan Series in his main sequence numbering. Therefore, the original number used for each of the 36 Series prints has been modified to identify the Fan Series members of its theme. The five different fan silhouette shapes have been here assigned arbitrary numbers 1 through 5. To indicate a fan design these shape designations are added to the 36 Series number separated by a hyphen. 136-3 is the Fan Series design with fan shape 3 in the 136 Hollyhock theme. Like all other designs in this series, 136-3 was only produced in a single print run, and few copies are currently documented.

Theme History:
The 136 Hollyhock theme is one of the many entirely regular themes represented by a complete fan quintet and a color woodblock print. Each of the fan designs in this theme, including 136-3, has seal C which indicates a carving date between the last months of 1933 and the end of the first quarter of 1934. However, the associated 36 Series design 136 has seal B which indicates a later carving period closer to the time of publication. Despite the early completion of many of its wooden blocks, Rakusan delayed printing and distribution of the prints in what became the 136 Hollyhock theme until the following year. It was eventually grouped with other summer season themes at the end of the series.

Description:
The composition of 136-3 includes a relatively slender hollyhock bloom spike with two associated leaves. Underneath the left leaf is a small spider, probably a kind of jumping spider. All of the design elements are rendered as simple line drawings which look equally well as ishizuri or reversed.


Species Illustrated:
Hollyhock, Alcea (Althaea) rosea, 立(ち)葵, たちあおい, タチアオイ, tachi-aoi, lit. 'erect mallow', is a familiar garden plant in Japan and around the world. Hollyhock was first imported into Japan from China hundreds of years ago, and the plant became important in Japanese cultural life. Many color variations and flower forms have been developed by Japanese breeders. Rakusan used several kinds of hollyhocks in his artworks.

Like English, Japanese has a general name for any spider, 蜘蛛, くも, クモ, kumo. Rakusan rarely included spiders in his artworks, and only three woodblock print examples are known. The small spider seen under the leaf at left center in 136-3 is of a species different from the others. It has no web and its location and general body shape suggest that it may be intended to be a kind of jumping spider (family Salticidae), 蠅捕蜘蛛, 蝿取蜘蛛, 蝿取蜘蛛, はえとりぐも, ハエトリグモ, haetori-gumo, lit. 'fly-catching spider'; (also spelled 蝿虎 / 蠅虎, lit. 'fly-tiger' with same pronunciation). However, the spider is very sketchily rendered, and exact identification is likely impossible.